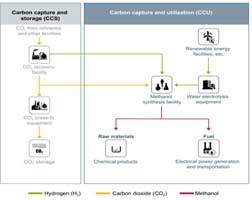 Mitsubishi Hitachi Power Systems (MHPS), Mitsubishi Heavy Industries Engineering (MHIENG) and Mitsubishi Gas Chemical Company (MGC) have been selected by the New Energy and Industrial Technology Development Organization (NEDO) to conduct joint research on the effective recycling of carbon dioxide (CO2) emitted from the refinery at Tomakomai City, Hokkaido, Japan where the CO2 is captured and stored by the existing demonstration plant.

Further utilising of the demonstration plant currently employed for CO2 Capture and Storage (CCS), the three companies will collaborate on research activities for CO2 Capture and Utilisation (CCU) in order to produce methanol from captured CO2. The research is expected to run until February 2021.

MHPS, as a leader of the consortium proposed using captured carbon dioxide to synthesize methanol, which is well known as a key fuel and raw material in a wide range of industries. The process will combine captured CO2 with hydrogen (H2) obtained either as a by-product from refineries or from water electrolysis within the existing CCS facilities. More information on the overall process is shown in Annex A.

The scope of the research includes performance assessment of key components of the proposed facilities with relevant technology survey, basic engineering for optimizing plant configuration, conducting an economic feasibility and its future outlook. The integration of CCU facilities with CCS facilities is expected to bring a benefit of sharing CO2 recovery functions and enhancing the interoperability of both facilities.

The consortium will conduct a survey project based on the assumption that an additional 20 ton/day class carbon-recycled methanol synthesis plant will be installed adjacent to the existing CCS facility. MGC will provide supply chain expertise related to methanol production and synthesis catalysts, as well as process technology for methanol production in cooperation with MHIENG. MHIENG will leverage its track record of EPC for a number of large-scale methanol plants, while MHPS will deploy its experience with EPC for a variety of business. Combining the strengths of these three companies will ensure a smooth implementation of the project.

The insights from the research also can be applied to various sources of CO2 emissions in the future. By studying technologies to capture, store and recycle carbon effectively, MHPS, MHIENG and MGC are actively contributing to the establishment of a carbon-free society and driving economic development while ensuring environmental conservation.

The process of CCS and CCU 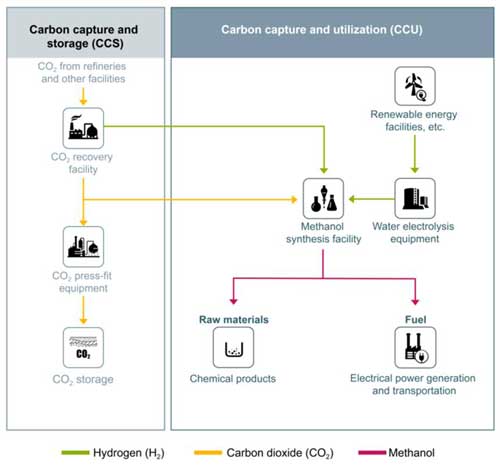 CO2 captured from refineries, power plants and other power generation-related facilities can be combined with hydrogen (H2) to generate methanol. H2 can be processed either from water electrolysis or as a by-product of the refineries and other facilities. The methanol can then be used as raw material for chemical products, as well as fuel for electric power generation and transportation. Since methanol is used as an important basic raw material in a wide range of chemical and energy applications such as chemical products and fuels, stable growth in methanol demand is expected.