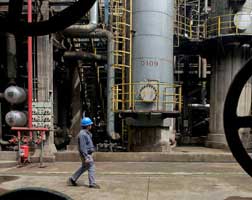 India’s Nayara Energy, in which Russian state oil giant Rosneft has a 49% stake, will invest US$850 million to expand its Vadinar Refinery in Gujarat, India. The company recently signed MOUs with the administration of India’s Gujarat state, marking its foray into the petrochemical business. Nayara Energy, formerly known as Essar Oil, operates a 20 million tonnes/year oil refinery in Gujarat.

Nayara Energy CEO B Anand said the project envisages the construction of a Propylene Recovery Unit with a capacity of 450,000 tonnes/year, a Polypropylene plant with a similar capacity and a facility to produce 200,000 tonnes of MTBE (methyl tertiary-butyl ether, used in high-octane fuel production) annually.

Besides, some of the funds will be allocated for increasing the capacity of the existing facilities to produce petrol and diesel fuel. The company also undertook a commitment to engage in an irrigation project, intended to develop agriculture in the region.

“The planned investment is basically diversification into petrochemical business,” he said, adding the unit is targeted to be completed by 2022-end.

Under the terms of the MOUs, Nayara Energy has committed to invest US$850 million towards Phase 1 of the expansion plan, which will see the establishment of new refinery and petrochemical units.

This investment will contribute significantly towards the development of Devbhumi Dwarka district as a petrochemical hub in India.

As part of the pacts signed, Nayara Energy will initiate smart agriculture and water conservation programme in 11,000 hectares in Dwarka.

“With our investments and the retail expansion that is underway, we plan to optimize India’s energy basket and offer energy to everyone,” Anand said.

Rosneft bought Essar Oil for US$12.9 billion in 2017 and later renamed the company as Nayara Energy.