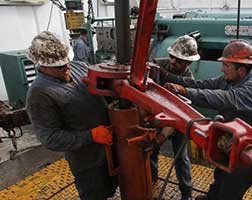 The drilling rig count in North Dakota’s oil patch, a closely watched metric through which many attempt to divine future crude production, appears to have hit a bottom.

For the past three weeks the count has hovered between 76 and 79, after sliding only slightly from 80 at the end of May. On June 12, the count hit 76, the lowest since 2009. The count bobbed slightly in the ensuing days, hitting 77 on Tuesday.

It has, in short, been the longest period since oil prices started to slide last fall that the rig count has stayed in the same range, offering many in and near the No. 2 U.S. crude-producing state’s energy industry a bit of solace that a nadir has been reached. In early March, for example, the count was at 113.

The apparent stabilization has produced a palpable sigh of relief around North Dakota’s western oilfields, where newspapers print the number daily.

Oil prices continue to inch higher from about $60 per barrel, and many producers have identified $65 to $70 as the range in which they would add more rigs.

Yet oil production continues to slide, dropping roughly 22,000 barrels per day (bpd) to 1.2 million bpd in April from March, according to state data.

Producers in the state, including Whiting Petroleum Corp and Hess Corp, have been experimenting with newer processes to hydraulically fracture new wells and to coax more oil from existing ones.

Effectively, they have tried to pump more with fewer rigs, but operators will soon have to return more equipment to the field.

“This has resulted in a current active drilling rig

count that is five to eight rigs below what operators indicated would be their 2015 average if oil prices remained below $65 per barrel,” Lynn Helms, head of the state’s Department of Mineral Resources, said in a monthly report.

Deutsche Bank analysts sounded a note of optimism on Tuesday for the broader U.S. shale industry when they forecast a 49 percent rise in the oil rig count for the rest of the year for six of the industry’s leaders, including Marathon Oil and EOG Resources, which operate in North Dakota.

Helmerich & Payne Inc, which operates drilling rigs, told investors on Tuesday there are “some indications that the trough may be nearing,” with customers hinting they may bring back idled rigs soon.

But the addition of more rigs and resulting boost in production raises the specter of lower prices.

Such a jump in rig counts could, the analysts noted, be “potentially challenging” for crude prices. – Reuters