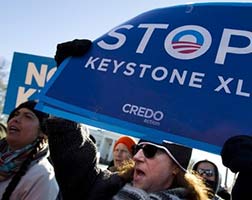 US President Barack Obama has vetoed a bill that would have approved construction of the Keystone XL oil pipeline.

The Republican-led Congress sent the bill to the president on Tuesday.

The 875-mile (1,400km) pipeline would carry tar sands oil from Alberta, Canada, to the US state of Nebraska where it joins pipes running to Texas.

The project has pitted Republicans and other supporters, who say it will create much needed jobs, against many Democrats and environmentalists, who warn the pipeline will add to carbon emissions and contribute to global warming.

More vetoes are expected in the coming months as Republicans in Congress craft legislation to reverse Mr Obama’s action on health care, immigration and financial regulation.

The Keystone XL pipeline project was first proposed more than six years ago, but has languished, awaiting a permit required by the federal government because it would cross an international boundary.

The White House has said the bill passed by Congress interfered with the normal permitting process.

Without a veto-busting majority in Congress, Republicans are considering inserting Keystone into other critical legislation dealing with energy, spending or infrastructure in the hope that Obama would be less likely to veto those priorities.