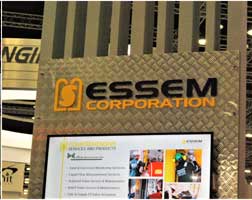 Essem Group is focusing on the next step, and that is regional expansion with Malaysia’s neighboring countries.

As Malaysia is the forefront of the oil and gas industry, Essem Group plans to bring that advantage to its neighboring countries, especially Myanmar, where they have ongoing projects at the moment.

Essem Group is a group of companies that are primarily involved in wellhead and completions, valves, safety mechanisms, and has recently branched into inspection, brought in by drones. Riezal Sufian, the executive director of corporate finance and planning, explained that Essem has drones that inspect large structures from oil rigs and factory towers, to inspecting confined spaces, with a confined space drone. The drone can be used for inspection of tanks, pipelines and confined spaces, well as inspect data.

The company covers the whole chain from upstream, downstream, offshore, as well as plants.

When working on a current project, Riezal says that being flexible is necessary, when it comes to the job which can vary from straightforward plant maintenance schedules to ad hoc, everything geared to what the customer requires, as the end customer is the end goal.

As a registered Petronas contractor, Essem Group maintains their wellheads in Sabah and Sarawak, according to Riezal. The company also manages other wellheads in Myanmar, Travvon, Repsol in Thailand, as well as Shell.

Being a service company, Essem Group is ensuring they assist the country in making sure the production increases and stays healthy. As contractors, proposals need to be reworked, cost reduction and looking at the bigger picture is all part of the process, in order for the oil and gas industry to move forward.

“If we remain selfish and say I have to operate this way, we are not taking any cuts ourselves, we are not going to contribute to making the industry better,” says Fuzz Sufian, the group’s managing director.

While oil prices continue to be unpredictable, Fuzz is certain that the industry will turn around, for both the operators, suppliers and service providers. “Now more than ever, operators and contractors like us, we are relying on each other,” he says, in reference to the current crunch budget. The oil flux has not only brought everyone together, in order to survive, but it has brought up huge questions that may change the way the business works.

“It’s a good period where everyone gets back to reality to focusing on what to deliver, instead of just the commercial side of business,” he says.