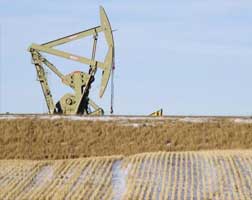 Oil prices came under renewed pressure in Tuesday’s post-settlement trade, after a 3-day losing streak, as an industry group reported a huge build in U.S. crude inventories ahead of official data.

Benchmark Brent oil had earlier ended up for the session, supported by a weaker dollar and short-covering, while U.S. crude closed down on bets that inventories hit record highs for a 10th straight week.

Industry group American Petroleum Institute (API) said after the market’s settlement that crude stockpiles rose by 10.5 million barrels in the week to March 13, far ahead of the 3.8 million forecast by analysts polled by Reuters. If correct, the API number would lift total U.S. inventories to 450 million barrels.

Official inventory data will be issued on Wednesday by the U.S. Energy Information Administration (EIA).

Market participants view the API’s number as a precursor to the EIA, although the two have often diverged.

Technical charts show brittle support for U.S. crude at above USUS$40, suggesting it could fall to between USUS$37 and USUS$32, analysts have said.

Rising output in Libya, and Iran’s wish to export more oil if it clinches a nuclear deal that would remove Western sanctions, had also pressured crude prices on Tuesday.

“All indications are there’s too much oil in the United States, and it’s growing, and that should drive prices lower,” said Sal Umek at the Energy Management Institute in New York.

Brent rose earlier in the day after some market bears closed out their short positions and took profit on its drop of more than 7 % in three earlier sessions.

The market’s downside was also limited by a weaker dollar to the euro that madecommodities denominated in the greenback more appealing to holders of the single currency.

Adding to the day’s volatility was position squaring ahead of options expiry in U.S. crude, which resulted in “a little crazy action,” said Tariq Zahir, managing partner at Tyche Capital Advisors in Laurel Hollow in New York.