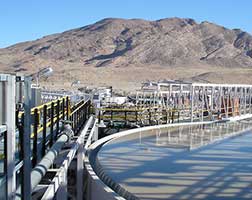 The company suspended production at its Kayelekera mine in Malawi in February 2014 due to low uranium prices and unprofitability, stating that it won’t restart the operation until uranium prices improve, and in the last three months of the year, trimmed its 2015 production guidance from 5.4-5.8 million lb. uranium oxide to 5.2-5.4 million lb of uranium oxide.

On the other hand, in the final two months of 2014, Paladin raised A$205 million (US$163 million), of which US$76 million came from HOPU Clean Energy (Singapore) Pte Ltd.  The capital is expected to help deal with the repayment of a US$300 million convertible bond due in November 2015.

HOPU, a part of a private equity firm with offices in Beijing, Hong Kong and Singapore and focusing on China-related investment opportunities, has a 15% stake in the company.

The strategic investment from HOPU follows Paladin’s sale in July 2014 of a 25% stake in its open-pit Langer Heinrich uranium mine in Namibia to a subsidiary of China National Nuclear Corporation (CNNC). Langer Heinrich is in the Namib Desert, and approximately 40 km southeast of the Rössing uranium mine operated by Rio Tinto, A British-Australian multinational metals and mining corporation.

This year Paladin is targeting production at budgeted rates and focusing on reducing operating costs and improving process efficiencies. The company has also started work on a feasibility study to develop a detailed plan for the re-start of Kayelekera when uranium prices justify and market conditions are more favorable. In addition to looking at cost optimising factors such as commercial power, the feasibility study will examine manpower rationalisation and other related improvements.