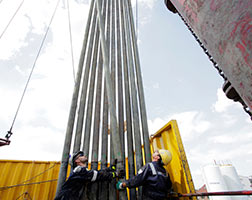 Squashed between a highway overpass and a towering suburban shopping center east of Paris, a drilling rig is completing the second of two geothermal wells aimed at capturing the earth’s natural heat for homes and offices.

The project is one of five around the French capital being built by Engie, the new name for GDF Suez SA, accelerating a geothermal boom in the region. Greater Paris already boasted the world’s largest concentration of deep geothermal wells linked to heating networks, even before these latest additions. An energy law making its way through the French parliament that seeks to spur rewewable energy could lead to more.

“This is the most active period for geothermal in two decades,” Damien Terouanne, head of Engie’s Cofely Reseaux unit that specializes in heating and cooling networks, said in an interview. “The geology of the Paris region is favorable and its population density makes projects worthwhile.”

The two 1,800-meter (5,900-feet) wells at Rosny-sous-Bois will provide about half the heating needs for the equivalent of 10,000 homes in the area, along with neighboring Noisy-le-Sec and Montreuil, according to a presentation on the project. State subsidies of 6.5 million euros (US$7.1 million) will help fund the 35 million-euro cost.

Electricite de France SA is also developing a new project at Bagneux, south of Paris. Nearby, independent utility Semhach SA operates a geothermal heating network with two new wells for the towns of Villejuif, Chevilly-Larue and L’Hay-les-Roses. New projects will bring the number around the French capital to about 40 by the end of this year, environment agency Ademe says.

With a capacity of 10 megawatts, Engie’s Noisy-le-Sec plant is part of a plan to double its geothermal capacity around Paris to about 100 megawatts in 2016, Terouanne says. Drilling is complete at another of its projects at Arcueil and Gentilly, south of the capital.

Geothermal heat for homes will be competitive with natural gas, according to Joelle Colosio, director of Ademe’s Paris-region office. Subsidies decided by the government fund about a fifth of the cost of projects including drilling insurance and have helped get geothermal “back on the map.”

Some new projects in the region are also seeking to exploit warm water closer to the surface, Colosio said in an interview. One project in the Batignolles neighborhood of inner Paris is for two wells about 800-meters deep to heat some 3,000 homes. – Bloomberg