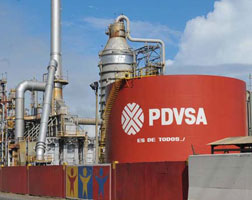 Venezuela’s output figures have often conflicted with international agencies, which estimate lower output due to methodological differences about how to count extra-heavy crude.

“We are exporting in the order of 2.4, 2.5 (million),” he added, giving latest data to foreign reporters on a trip to the Orinoco Belt region in recent days.

Total investment in that region, recently renamed the Hugo Chavez Belt in honor of Venezuela’s late president and where PDVSA has multiple joint ventures with foreign companies, should reach US$15 billion this year, he added.

Much of that would be in drilling, with PDVSA currently connecting new oil wells at a rate of two per day, and aspiring to raise that to three, the PDVSA boss said.

“We need one well per day at least to compensate decline,” he said, adding that to speed well construction, contractors needed to move down closer to the Orinoco from the northern coastal region where they are based to save time and transport.

New pipelines and pumps, plus basic engineering for upgraders, refineries and terminals serving the Orinoco region, would also account for part of the investment, he said.

It was unclear where the investment Del Pino mentioned would come from. While several foreign companies are negotiating deals that would entail fresh investment, sources say some of the talks are taking longer than expected.

PDVSA has formal ambitious targets to double national production to 6 million by 2019, with 4 million of that projected to come from the Orinoco Belt – but few industry experts or foreign investors expect those goals to be met.

With Venezuela mired in a severe recession and around 96 % of export revenue coming from oil, an increase in crude production is direly needed to help the government.

Del Pino said he was not worried about where Venezuela would place anticipated future extra output in the market as Orinoco production grows.

“We estimate increasing (global) demands. In the order of 10-15 million barrels per day extra demand in the next 10 years,” he said, adding that the market was especially amenable to more heavy-crude production.

“Fracking will peak then decline very soon. Declination is very fast. Fracking has a 70 % decline rate. The Faja has a 30 % decline rate,” he added, in reference to the shale boom in the United States and elsewhere, which Venezuela has blamed for the recent tumble in oil prices.

Early production in the Orinoco Belt has reached 50,000 barrels-per-day, PDVSA officials said, and overall output from that region was expected to end 2015 at 1.483 million bpd compared to 1.350 million bpd currently.

PDVSA officials stressed the importance of Venezuela’s Asian export markets, saying they were currently sending roughly 550,000 bpd to China and between 360,000-400,000 bpd to India.

“Russia will be developing a lot of fields in the north. I think that is our competitor. Shale oil will not displace ours, it will displace light oil,” he added. – Reuters