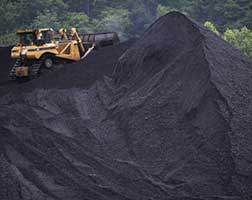 Peabody has lost more than US$1.8 billion since 2012, according to the Business Journal. In the first three months of this year, the company’s revenue was US$1.54 billion, down from US$1.63 billion in the same period a year ago, Peabody told investors in April.

The domestic coal industry has struggled to compete with cheap natural gas unlocked by new shale drilling techniques. In recent years, global demand for coal has dropped too, as China — the world’slargest producer and consumer of the energy source — suffers from oversupply. New regulations from the Environmental Protection Agency to cut carbon emissions from U.S. power plants and mounting global concern over coal’s climate footprint also cast a shadow over the industry’s long-term future.

Earlier this month, the American Coal Company, a subsidiary of Ohio-based Murray Energy, warned of possible layoffs in August at its mining complex in Galatia, Illinois. Last month, West Virginia’s two largest coal producers — Alpha Natural Resources and Murray Energy — told 2,200 workers they would be laid off in 60 days.