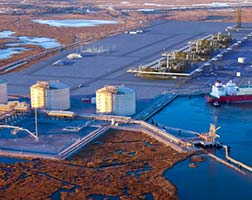 Mexico’s state oil company, Pemex says it is partnering with IEnova, the Mexican affiliate of Sempra into the LNG business. Pemex said it has signed an MoU with IEnova for the development of a LNG project at Sempra LNG’s existing Energia Costa Azul plant at Ensenada, Baja California.

The accord sets the terms for the scope of each party’s participation in the project, including the development, structure and terms under which Pemex could become either a client or investor, the state company said in a statement.

The statement added that Pemex said the agreement will allow it to strengthen its position in world natural gas markets, “reaping the economic benefits of the differential in prices.”

Pemex recently used similar reasoning when it announced it could bring natural gas from a pipeline along the Isthmus of Tehuantepec between its Pajaritos refinery on the Gulf to Salina Cruz on the Pacific. At the time, Pemex said it wanted to cash in on high gas prices in Asia by shipping LNG from a terminal on the Pacific. The Pemex statement said this would be the company’s first LNG venture, and it would help develop the company’s international commercial relations