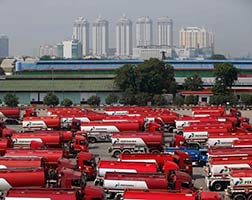 JAKARTA – According to reports, Indonesia is placing Mahakam gas block under the state-owned oil and gas firm, Pertamina’s control once its current operator’s contract, held by Total E&P Indonesia, expires in 2017.

The country is one of the world’s biggest LNG exporters, but with domestic output weakening and local demand increasing, Indoensia has begun consuming more of its production and is seeking overseas supplies.

According to the Energy Ministry performance unit chief Widhyawan Prawiraatmadja, the government will give 100% of the Mahakam block to Pertamina; and will let the state-owned oil corporation decide their partner by themselves.

Total previously proposed a five-year transition period in which it continues to operate the block in partnership, and has warned that output could decline sharply if a decision on future plans for the block is not made quickly.

Recently, another energy ministry official said the East Kalimantan administration may take a 10% participating interest in the Mahakam block under the revised contract, which the government hopes to finalise this month.