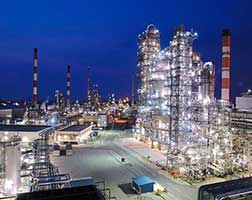 PETALING JAYA: Petroleum refineries are finding themselves in a sweet spot given that their raw material, crude oil, continues to trade in a bearish market.

Brent crude, the global benchmark, has fallen by more than 21% since early May when it was trading at the highest for the year. It closed at US$54.62 a barrel last Friday.

The share prices of refineries have done well due to their position in the supply chain. For one, growing economies have fuelled demand.

RHB’s Bangkok-based head of regional oil and gas, Kannika Siamwalla told StarBiz that this was due to the spreads between feedstocks and end-products, which have sustained at healthy levels despite falling crude oil prices.

Kannika said the spreads between buying prices of feedstock for refineries, which is crude oil, and the selling prices of end-products such as diesel, gasoline and jet fuel have actually improved and were at a “healthy” level today.

“At the end of last year we gathered from industry players that refineries were expecting spreads to average at US$6 per barrel, but spreads in the first half have averaged at US$10 per barrel. This is 40% higher than our expectation,” she said, noting that spreads in Thailand’s refineries closely follow regional spreads.

Petron recently posted a turnaround in net profit, reporting earnings of RM56.8mil for the first quarter ended March 31, from a net loss of RM6.72mil in the same quarter a year ago.

Meanwhile, Shell Refining’s share price has been stuck in a narrow trading band as investors follow closely what controlling shareholder Shell Overseas Holding Ltd would do with its 51% stake in the company. The shareholder has mulled over a sale of the stake as well as converting the business to a storage terminal and export facility.

Over in Thailand, Kannika has maintained a buy call on PTT Global Chemical with a target price of 73.20 baht (RM7.98).

However, she expects refining margins in the second half of 2015 to soften on higher capacity. – The Star