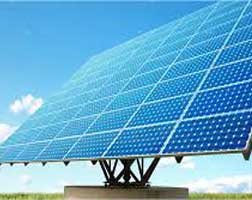 The efforts made by various governments and organizations to fuel the increasing energy demand with the more environment friendly renewable energy is proving to be a boom for photovoltaics market. Owning to such efforts the photovoltaics market is expected to grow during the forecast period.

Energy demand is increasing rapidly and the oil reserves are depleting. To meet this demand government is investing in renewable source of energy.

Renewable energy also reduces burden from the non-renewable source of energy such as coal, oil and natural gas. In terms of global installations, photovoltaic is the third most important source of renewable energy after hydro and wind power.

A photon of light excites an electron into a higher state of energy, allowing them to act as a charge carrier for an electric circuit. This is known as the photovoltaic effect.

In a photovoltaic system, solar panels are used which consists of a number of solar cells. As the conversion of sunlight into electricity occurs without any environmental emission, the power generated from photovoltaics is considered as clean energy.

Solar cells are packed tightly behind a glass sheet to protect them from the environment. Cells are internally connected together to form a photovoltaic module.

The number of cells that are interconnected depends upon the type of application. Solar panels can be installed on the ground or on the roof.

Thus, increase the efficiency of the solar panel. The efficiency is improved by approximately 20% in winters and 50% in summers by using solar tracker.

On the basis of technology, the photovoltaics market can be segmented into multicrystalline solar cells, thin film solar cells, monocrystalline silicon technology, polycrystalline thin film and others. The photovoltaics market can be segmented on the basis of applications into power stations, telecommunication & signaling, spacecraft application, rural electrification and others (transport, solar roadways, etc).

In European countries, Germany is expected to be the market leader in the photovoltaics market followed by Italy.

High installation cost is a restrain for the photovoltaics market. But the research and development has resulted in improved technology and efficiencies.

This has helped in reducing the quantity of material being used in solar cells that ultimately reduces the initial cost. Moreover, governments of various countries have launched various schemes to promote the installation of various facilities which produces energy using non renewable sources of energy.

Incentives or grant is provided to the companies producing renewable energy. This has further boosted the photovoltaics market.

Shifting focus towards renewable energy will provide more opportunity to the photovoltaics market during the forecast period across the world.