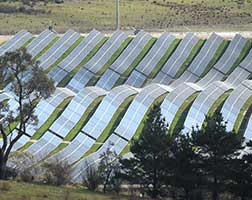 A series of planned solar farms in Queensland is facing opposition from a local cane harvester and sugar mill who say that the project will take up “good quality agricultural land”.
The Queensland government is considering stepping in to take up a legal challenge.

The Spanish renewable energy developer FRV has approval from the local council and a deal with a cane farmer to build a 130-megawatt facility on his property in Clare, where the company says there is some of the most powerful sunlight in the country.

Under the sun: Australia’s largest solar farm set to sprout in a Queensland field

The prospect that the project could become tied up in a planning court case led FRV and Burdekin shire council to ask the deputy premier and planning minister, Jackie Trad, to “call in” the development.

This week Trad announced she would consider a “call in”, giving her the final decision on the project which would then be immune to legal challenge.

FRV claims it would invest up to $400m to fully develop the solar farm, which it says would be ideally located next to an existing power substation in Clare, “among sites with the highest levels of solar irradiation in Australia”.

A cane farmer, Lyndsey Hall, has agreed to give over 340ha – which would produce about 27,000 tonnes of sugar cane a year – for the solar farm.

Burdekin shire council approved the development in May but a sugar miller, Wilmar, and cane harvesters Lawrence and Patricia Brotto lodged an appeal.

In their appeal documents, they claim it flies in the face of planning laws and policy around the use of quality agricultural land.

They argue FRV has not shown an “overriding need for the proposed development” or that there is “no alternative site” or “adverse character or amenity impacts”.

Trad said the government was committed to “listen[ing] to the community and this proposed ‘call in’ notice will provide an opportunity for all interested parties to have their say”.

She will decide by 10 September whether to take control of oversight of the solar proposal.