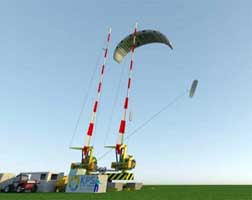 KPS is currently working on a 17-meter device that flies on air currents high above the ground and generates power by pulling at a cable. It raised £5 million (US$6.4 million) from the three energy giants in December last year.

“The reason we are interested in something like this is that it has potential to reduce the cost of offshore wind in the future,” Shell Technology Ventures BV managing director Geert van de Wouw said.

“Fundamentally, looking at the science, flying the kite at high altitudes so there’s lots of wind and the cost of materials is quite a lot lower than a normal offshore wind turbine,” van de Wouw added.

Alternatives to traditional wind turbines are in the works at multiple startups, some backed by corporations in energy and tech such as Alphabet Inc.

German utility EON has also invested in a test site in Ireland for drones that are designed to fly at high altitudes and generate energy.

The kites work by sending aloft a wing to fly in a circular looping path much like the tip of a wind turbine blade. The machines harness aerodynamic lift from the wind exerted against the tether linked to the ground. Tension in that tether causes the line to rapidly spool out from a drum, which is connected to a generator.

Kite Power Systems is to start testing its machines in July or August at a site in Scotland.

“There’s 3 gigawatts (GW) of offshore wind coming to the end of life in the 2020s,” Ainsworth said. “It’ll have to be decommissioned, but you’ll still have the infrastructure there, the grid. There’s an opportunity to repower with kites.”

Kite Power Systems believes that its system could generate electricity between 55% and 58% of the time, a capacity factor that is higher than a conventional wind farm.

Ainsworth expects that the company’s technology could eventually reach as much as 6 MW from each machine.