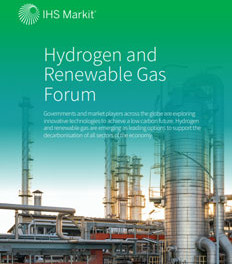 By 2030 the production of hydrogen fuel by “splitting” water—which can be carbon-free provided the electricity used in the process is produced by renewables—could become cost competitive with currently predominant methods that require the use of natural gas as a feedstock, according to analysis by the IHS Markit “Hydrogen and Renewable Gas Forum”.

This so-called “green” hydrogen produced by electrolysis—a process that uses electricity to split water into hydrogen and oxygen—is rapidly developing from pilot to commercial-scale operation in many parts of the world.

“Costs for producing green hydrogen have fallen 50% since 2015 and could be reduced by an additional 30% by 2025 due to the benefits of increased scale and more standardised manufacturing, among other factors,” said Simon Blakey, IHS Markit Senior Advisor, Global Gas.

“The work that we have done for the IHS Markit Hydrogen Forum,” added Blakey “very much focuses on economies of scale as a way of reducing costs, developing dedicated renewables in order to get the load factor on the electrolyser up and, of course, continued expectations of falling costs for renewables.

“We’re all pretty clear that the trends are in that direction in all three of those areas,” Blakey said moderating a recent panel on hydrogen for the CERAWeek Conversations.

Investment in so-called “power-to-x”* projects—of which hydrogen makes up the large majority—is growing rapidly. Investment is expected to grow from around US$30 million in 2019 to more than US$700 million in 2023.

Economies of scale are a primary driver for green hydrogen’s growing cost competitiveness. The average size for power-to-x projects scheduled for 2023 is 100 megawatts—ten times the capacity of the largest project in operation today—according to the IHS Markit Power-to-X Tracker, which tracks hydrogen projects around the world.

Hydrogen production that uses natural gas as a feedstock, via a process known as methane reforming, currently supplies the hydrogen to the chemical and refining industries that today make up the bulk of global hydrogen demand.

“Blue and green hydrogen are extremely complementary, Srinivasan added. “If they are developed in parallel, hydrogen will be able to make a big contribution to future energy demand, especially with the ambitious goals on carbon.”

“In Europe it is now widely agreed that electrification alone cannot deliver the level of emissions reduction that many countries aspire to,” said Catherine Robinson, IHS Markit Executive Director, European Power, Hydrogen and Renewable Gas. “Hydrogen is a highly versatile fuel—both in terms of how it can be transported and the variety of its potential end-use applications. The greater the degree of a decarbonization, the greater the likely role of hydrogen in the energy future.”