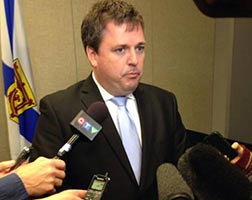 HALIFAX – A program to encourage small-scale electricity producers in Nova Scotia have been ended by its government.

Energy Minister Michel Samson said the COMFIT program has served its purpose by encouraging renewable energy projects capable of producing 125 megawatts of electricity by the end of this year.

He said to continue the feed-in tariff program further would cause Nova Scotia Power (TSX:EMA) to raise the rates for electricity consumers in a province that already has some of the highest energy costs in the country.

Samson said a review by his department found no new generation is needed and that Nova Scotians pay more for energy with small-scale, community-based projects than from other sources.

He said more details on renewable energy and its role in the province’s energy future will be released this fall in the government’s electricity plan.