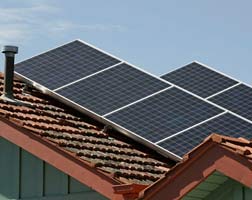 The ReachTel poll, conducted on Monday night for a coalition of the Wilderness Society, the Conservation Council of WA, and Solar Citizens, found that 13.4% of respondents nominated renewable energy as an issue that would affect their vote, compared with 12.8% who nominated national security.

Canning byelection: Liberal candidate Andrew Hastie takes one for Abbott
A second poll, conducted by Essential Research for GetUp, found that 48% of swinging voters would be less likely to vote for the Liberal candidate, Andrew Hastie, if the Abbott government reduced the renewable energy target and reduced support to the clean energy industry.

Both polls put the Coalition slightly ahead in two-party-preferred terms, 51% to 49%. The late Liberal MP Don Randall, whose sudden death in July prompted the September 19 byelection, held the seat by a margin of 11.8%.

The semi-rural seat on the south-eastern fringe of Perth is shaping up to be a battleground for renewable energy – the Solar Council has already letterboxed houses in Canning to advocate against the government, arguing that the recent reduction in the renewable energy targeted rooftop solar. According to the RenewEconomy website, Canning has the 12th highest uptake of solar of any electorate in Australia, with almost half the houses sporting either rooftop solar or solar hot water.

“Renewable energy is a huge growth industry in Canning and Western Australia, especially with the mining boom coming to an end,” O’Rourke said.

“This poll shows that the people of Canning will vote for a party that adopts ambitious renewable energy policies.”

But despite the apparent hit to former SAS officer Hastie’s main selling point of national security, the results are not necessarily a win for Labor, whose candidate, Matt Keogh, is campaigning on the ALP’s bedrock platforms of education and health. Just 8.8% of people said education would most influence their vote, while health drew rank with national security.

Economic management is now Tony Abbott’s weakest claim to re-election
Managing the economy and jobs (33.1%) and the cost of living (19.1%) were the greatest areas of concern.

Liberal voters were more than twice as likely as the average voter to care about national security, ranking it as their second greatest concern behind managing the economy.

However the poll showed that support for increasing the renewable energy target was strong across all political persuasions.

Potential for job creation was cited as the major reason for that support, followed by the prospect it would make battery storage for solar more affordable, and better feed-in tariffs for rooftop solar.

The federal government has already reduced the renewable energy target from 41,000 gigawatt hours to 33,000gWh, or just under 22% of national energy demand, with the target to remain fixed until 2020. The legislation passed the Senate in June and was welcomed by business groups, who said it was a “sensible reform” in reaction to lower than anticipated energy demand.