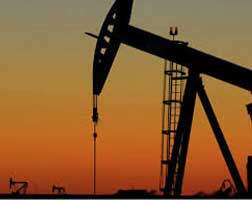 Oil production in the United States will continue its muscular output despite falling oil prices, according to federal estimates.

West Texas crude is forecast to average US$55 a barrel this year and US$62 a barrel in 2016, according to the report. Although this may be an ongoing challenge for producers, it’s good news for motorists at the pump.

The EIA expects monthly average gasoline prices to decline the rest of the year, averaging US$2.43 a gallon during the second half of 2015, down from US$2.72 a gallon in May. Though gas prices may spike this summer, as they typically do, overall pump prices will be down from last year, said Skip York, vice president of integrated energy at consultants Wood Mackenzie.

“The consumer will still see a windfall from this price correction,” he said.

The numbers run counter to conventional thinking that lower oil prices would severely drive down U.S. production. Though U.S. producers are operating fewer rigs, they are likely to maintain high output levels.

“U.S. oil production since mid-2014 has been more resilient to lower crude prices than many had expected,” the agency’s administrator, Adam Sieminski, said in a statement. “Despite the large decline in crude oil prices since June 2014, this May’s estimated oil output in the United States is the highest for any month since 1972, but production still is expected to decline in the second half of this year.”

The price for a barrel of West Texas Intermediate crude has ricocheted from more than US$100 last summer to US$40 in January to US$60 this week. It was unclear how the report would further impact crude prices. The lower prices have led producers to scale back production and shut down rigs, leading to nearly 100,000 lost energy-related jobs. There were 750 crude oil rigs operating in the U.S. in April, down from a high of 1,596 in October, according to the EIA.

Despite the drop in prices and shuttered rigs, U.S. producers have maintained high flow levels. Operators have weathered the drop in prices, in part by becoming more efficient, such as scaling back on lesser-producing rigs and focusing on more productive ones, York said.

Also, companies that service rigs and supply crews slashed their day rates — some up to 40% — in order to keep crews together, which helped drillers maintain production, he said. Prices will need to tick back up in order for the oilfield service industry to survive, he said. “These service guys can’t operate in this environment forever,” he said.

At US$60 a barrel, most producers can continue to pump crude at a profit, said Jonathan Sloan, director of Houston-based Catalyst Energy Advisors. The EIA report wasn’t a huge surprise to industry insiders, many of whom predicted a slowdown in the growth rate — not an overall decline in production.

But it’s a clear sign that last year’s boom, in places like the Eagle Ford Shale in South Texas and in the Gulf of Mexico, triggered an output flurry that will weather fluctuating prices.

“We had such a strong wind behind our sails from last year’s massive drilling activity,” he said. “It’ll be hard to stop a lot of that.” – USAtoday