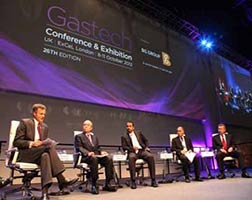 The Russian gas company executives are looking to expand their markets to South East Asia as they speak at Gastech Conference in Singapore from October 27 to 30 2015. Gastech is the world’s largest international conference and exhibition representing the natural gas and LNG supply chain.

They will be joined by other senior Russian executives (including Frédéric Barnaud, Gazprom’s Executive Director for Oil, LNG and Shipping), who are keen to build dialogue with new markets after recent turbulence between Russia’s traditional customers in Europe has forced the gas giant to look east where demand growth is forecast to be strongest.

Medvedev and Burmistrova will give keynote addresses as Gazprom sets to turn around the recent sanctions squeezes and major drop off in hydrocarbon pricing to ramp up Russian plans for increased exports. They will be joined by about 120 other speakers at the four-day event.