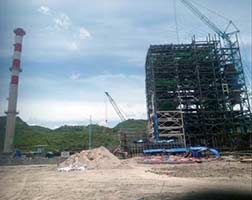 This will be done after the completion of the first-phase of its 210 megawatt (MW) coal-fired power plant in Maasim, Sarangani.

Start of construction for the hydro facility is planned by the first quarter next year, according to Oscar Benedict E. Contreras III, corporate communications head of ACR’s power group, but other project details are still being finalized.

In April, Joseph C. Nocos, ACR vice-president for business development, said the company is aiming for a balanced power mix incorporating fossil and green energy sources, with the company open to participating in any privatization of the Agus and Pulangi hydroelectric complexes, on which more than half of Mindanao’s power supply depends.

Meanwhile, the first 105-MW unit of SEC’s coal-fired plant is scheduled for commercial operations within the first quarter of 2016 and the full 210-MW capacity by 2018.

“(The first unit) is about 98% done… Commissioning will commence in October 2015 and commercial operations targeted to begin by first quarter of 2016,” Mr. Contreras said.

The US$570-million SEC plant, which at the start met opposition from local Catholic leaders and environmental groups, is the single largest investment in Sarangani province and the entire Soccsksargen, a region that is among the top producers of major agricultural export commodities.

Soccsksargen — which stands for the region’s four provinces and one city: South Cotabato, Cotabato, Sultan Kudarat, Sarangani, and General Santos City — is the top tuna producer in the country, second in pineapple and third in banana.

Another ACR subsidiary, San Ramon Power, Inc., is also developing a 105-MW coal-fired power plant in Zamboanga City with construction set to start within the second half of 2016 and commercial operations seen by 2019.

The power group is projecting to supply about 25% of Mindanao’s peak demand by 2019 with a combined capacity of 588 MW.