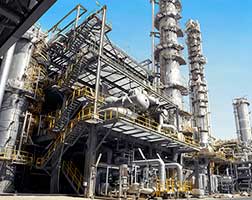 Mr. Wang Zhiqing, Chairman of Shanghai Petrochemical, said, “The global economy experienced a tortuous and slow recovery. Amidst such a complicated domestic and foreign economic environment and facing growing downward pressure, the PRC economy managed to show a slow-yet-steady development trend with growth within a reasonable range as a result of macroeconomic regulation and control and innovative reforms, signaling a further slowdown in economic growth.

In the first half of the year, the PRC petrochemical sector generally remained stable. The performance of the refining sector continued to improve, and the petrochemicals sector even witnessed relatively rapid profit growth. Nonetheless, the market demand was still rather weak, with an overall slowdown in petroleum and petrochemical consumption growth. Overcapacity in the industry was overwhelming, market competition intensified further. Amidst complicated and severe market conditions in the first half of 2015, the Group strived to maintain steady operation in terms of safety, environmental protection and production, while ramping up efforts in structure optimization, cost-saving and profit-increasing.”

In the first half of 2015, the global supply of crude oil remained high, and due to a potential rebound in demand and a pending slowdown in oil production, global crude oil prices experienced a decline before showing a fluctuating rising trend, then leveling off. The average unit cost of crude oil processed (for the Group’s own account) was RMB2,652.96 per ton, representing a decrease of RMB2,213.98 per ton, or 45.49% year-on-year. The Group’s cost of crude oil accounted for 54.06% of the total cost of sales.

During the Period, the Group ramped up inspection efforts for the sake of safety and environmental protection, and successfully passed the Clean production check and acceptance conducted by the Shanghai Clean Production Center. The Group further advanced quantitative patrols and checks on equipment, thereby eliminating facilities hazards and realizing the stable and long-term operation of production devices.

Meanwhile, the Group integrated its optimization model for the full process flow of oil refining, placed emphasis on estimating the cost-performance of different kinds of crude oil and optimized its crude oil structure. It also reinforced the tracking of marginal contribution from petrochemical facilities and adherence to dynamic optimization mechanisms with the aim of boosting efforts in further optimization to its integrated refining and petrochemical system. In respect of the implementation of key scientific research projects, the Group continued to make progress and facilitated industrial development and market exploration for its new products.

The Group developed and produced 150,900 tons of new products, and submitted 22 patent applications, with nine patent authorizations granted. With the in-depth development of an e-commerce sales model for its products, the Group gradually increased the types and quantities of petrochemical products traded online on its e-commerce platform. The Group worked hard to promote its integrated management system and to optimize business flow. In April, the Group was duly recognized by the Ministry of Industry and Information Technology as one of the very first batch of enterprises to meet the national standards for management systems in regard to the integration of informatization and industrialization.

Looking ahead, Mr. Wang Zhiqing said, “In the second half of 2015, the global economy will continue to be in a stage of deep adjustments. The environment is less optimistic, with the sluggish economy struggling to recover and the major economies demonstrating diverse development trends. The Chinese economy realized a slow-yet-stable performance within a reasonable range in the first half of the year.

However, as the economy is still under great pressure to maintain steady growth, to adjust structure, to continue its reforms and to be innovative, it will continue to face downward pressure in the second half of the year. The prospects for the petrochemical industry will remain complicated. Overcapacity persists, along with weakening innovation abilities and relatively low product grades, resulting in internal pressure on the operation of the industry. Meanwhile, with the government continuing to strengthen its policies to support steady growth, market demand has increased steadily and the prices of petroleum and petrochemical products have continued to stabilize.

The petrochemical industry in China is expected to continue to undergo steady development in the second half of the year. Facing a challenging market environment, we will focus on enhancing the quality and efficiency of its development and will continue to step up efforts in safety and environmental protection, production and operations, system optimization, cost-saving and expenses reduction as well as intensification of its management. The Group will also enhance its efficiency.”

Shanghai Petrochemical is one of the largest petrochemical companies in China in terms of sales revenue, and was one of the first Chinese companies to complete a global securities offering. Located in the Jinshan District in southwest Shanghai, the Group is a highly-integrated petrochemicals enterprise which processes crude oil into a broad range of products such as synthetic fibres, resins and plastics, intermediate petrochemicals and petroleum products.