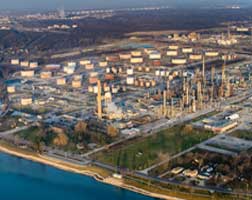 In a move to move away from the oil to gas sector, Shell Canada is looking for a buyer for its 77,000 barrel-per-day Sarnia Manufacturing Centre in Corunna. Having operated it since 1963, Shell is now reported to be looking for a buyer for the refinery, chemical plant, and Sarnia distribution terminal – as well as another distribution terminal in Hamilton and Shell’s 45% stake in the Sun Canadian Pipeline.

Included in the sale will be about 400 jobs on the grounds south of Aamjiwnaang First Nation and along the St. Clair River.

According to a spokesperson, Shell will continue operating the site if it doesn’t manage to sell it and does not intend to close it down.

The refinery is one of the company’s best, but is not part of Shell’s long-term strategy to transition to new energies, said the spokesperson, noting that the process to find a buyer is expected to take months.

The company is moving towards the cash engines of conventional oil and gas, integrated gas and oil products to deliver the cash to fund future growth in new energies, with an investment in liquefied natural gas the company made last year.

The company did not reveal the asking price or prospective buyers.

Shell’s retail and aviation businesses in Ontario are not for sale, it says.

The company says the Sarnia Manufacturing Centre was originally built by Canadian Oil Companies Limited in 1952.