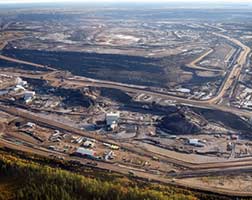 Shell has cancelled plans for a major new tar sands mine in Canada.

The company has withdrawn its application for the 200,000-barrel-per-day (bpd) Pierre River project and will instead concentrate on boosting the profitability of its existing 255,000-bpd oil sands operations.

“The Pierre River Mine remains a very long-term opportunity for us, but it’s not currently a priority,” said Lorraine Mitchelmore, president of Shell’s Canada. “Our current focus is on making our heavy oil business as economically and environmentally competitive as possible.”

Oil sands extraction is controversial because of its high carbon footprint compared to conventional crude. Furthermore, a series of analyses have found that the world’s fossil fuel reserves are already three times greater than could be burned if global warming is to remain below 2C, the stated aim of the world’s nations.

If governments keep their pledge, the unburnable fossil fuels will have to remain in the ground and would become worthless, potentially endangering trillions of dollars of investors’ funds.

A study in January found that virtually all tar sands exploitation was incompatible with a 2C limit, while scientist Prof James Hansen has previously said that it would be “game over” for the climate if Canada’s tar sands were fully exploited. Exploiting the Arctic for oil is also seen as incompatible with tackling climate change, but in January Shell reasserted its desire to push ahead with the troubled programme.

Shell’s withdrawal from the Pierre River project is the latest in a series of blows to the oil sands industry as one of the world’s highest-cost production regions tries to cope with prices that fallen to six-year lows.

Total, Statoil and Cenovus Energy have all recently postponed big oil sands projects. The government of Alberta, where the mines are sited, expects to lose C$7bn in revenue this year because of low oil prices. It called Shell’s move “a business decision”, saying the oil sands remain viable despite low prices.

“Oil production in Alberta will continue to grow,” said Derek Cummings, a spokesman for the province’s energy minister. “Production may grow at a slightly slower pace … but we see the oil sands as being resilient.”

Andrew Grant, financial analyst at the Carbon Tracker Initiative, which has led the analysis of unburnable carbon, said: “Shell’s deferral of Pierre River, one of the high-cost oil sands projects highlighted in our 2014 analysis, is in line with our belief that companies should cancel capital ependiture (capex) on high-cost projects in favour of a portfolio of low break-even investments in order to protect shareholder value.”