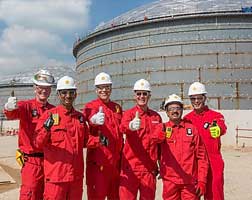 Anglo-Dutch oil/petchem firm Shell has increased storage capacity at its Bukom refinery in Singapore by building two large crude oil tanks that increase the site’s storage capacity by nearly 1.3 million barrels. Shell says the project is part of its ongoing effort to improve competitiveness by investing in storage and logistics at its core refineries.

Shell built the storage tanks using an automated welding technology, which helped reduce welding time by 60% and lowered costs. A special aluminum alloy used in the tank roofs provides better protection against severe weather, such as lightning, and will help prevent common maintenance issues like rust and corrosion. Shell also used a new method to lift, move and install heavy materials when building the tanks, which helped keep employees safe during construction by reducing the need to work at heights and to carry out heavy lifting.

At its peak, approximately 500 people worked more than 2.8 million hours on the project. When laying the foundation, about 1,200 trucks filled with concrete were transported to the construction site on ferries. Shell also built a new seawall and modified nearby drainage systems to help protect the environment.

Singapore is Shell’s largest petrochemical production and export centre in the Asia-Pacific region.

Demand for some oil products, for example diesel, jet fuel and bitumen, in the region and around the world is expected to increase over the next two decades as populations continue to grow and more people achieve a higher standard of living.

Shell is investing in storage and logistics to further enhance the competitive edge of its large, complex and integrated sites in Singapore, Rotterdam and the US Gulf Coast.