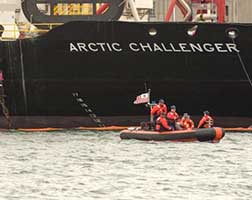 Shell Oil’s Arctic-bound drilling rig Polar Pioneer has failed to pass a United States Coast Guard inspection, according to The Stranger, a newspaper in Seattle, where the vessel is docked.

The Coast Guard is downplaying the story. According to Lt. Dana Warr, a Coast Guard spokesperson in Seattle, “It’s not uncommon with these commercial vessels that there are issues to follow up” on this type of inspection, which covers 160 items involving a vessel’s construction, design, maintenance, and crew standards. “Parts of [the inspection] were great,” he said.

The Coast Guard will not release information on this inspection, Warr said, noting that the service inspects more than 70,000 domestic vessels and 10,000 foreign vessels a year.

“It’s not fair to say there was a ‘fail,’ when we give them opportunities to remediate the issues,” Warr said. “At the end of the day our goal is to ensure compliance with the standards designed to protect mariners.”

The Coast Guard will re-check Polar Pioneer to verify that the problems have been fixed before it is given the needed “certificate of compliance” to leave Seattle for the Arctic, he said.

On Friday, according to local public radio station KUOW, the Washington Department of Natural Resources informed the company that while it can dock the Polar Pioneer at the Port of Seattle in the short term, long-term moorage might be illegal.

Part of the oil-drilling platform is jutting past its dock—and the harbor line—into part of the Duwamish River. The Washington state constitution bars “any private person, corporation or association any rights whatever in the waters beyond such harbor lines.”

The state discovered the issue after being contacted by anti-Shell activists, who were seeking legal moorage for a solar-powered barge. That led officials to review the Polar Pioneer’s situation as well.

“Opening development on a new fossil fuel reservoir in the Arctic not only puts the natural resources, ecosystems, and the dependent communities at risk, it also contradicts the President’s Climate Action Plan to limit greenhouse gas emissions and reduceclimate change,” the letter states. “It is an unacceptable and irresponsible decision.”

Protests against Shell continued in Washington over the weekend. On Friday protestor Chiara D’Angelo climbed and occupied an anchor chain on the Arctic Challenger, another vessel in Shell’s Arctic fleet. She was joined on Saturday by protester Matt Fuller. The Coast Guard assisted Fuller down on Sunday after he called for assistance, while D’Angelo continued to protest until Monday.

The Arctic Challenger is moored at Bellingham Bay, about 17 miles south of the U.S.-Canada border. According to the Department of the Interior, it is carrying equipment intended to help limit environmental damage if Shell’s operations in the Arctic this summer result in an oil spill. – Takepart.com