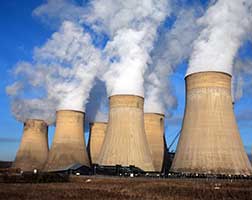 The nuclear power industry is trying to get ahead of national energy curve — producing a study in advance of the Obama administration’s Clean Power Plan to cut carbon emissions. The sector’s report sets out to quantify the fuel’s current economic and environmental contributions.

At the same time, the Brattle Group’s study released this week wants policymakers to look over the horizon — to see that the country needs portfolio diversity, and to not become beholden to natural gas. If the goal is to reduce carbon emissions by 30 % by 2030, then the analysis concludes that nuclear energy is an essential piece of the puzzle — one that is basically carbon-free and cost-effective once plants are up-and-running.

“(P)olicymakers must act to avoid long-term economic consequences,” says former Senator Evan Bayh, D-Indiana, in an email exchange. “As the Brattle report underscores, preserving America’s existing nuclear fleet is no exception” – a power source responsible for 19 % of the nation’s electricity.

Specifically, the Brattle Group’s analysis – commissioned by the pro-nuclear group Nuclear Matters — says that nuclear energy plants contribute US$60 billion a year to the nation’s total economic output. That, in turn, is responsible for 475,000 jobs, both direct and secondary, as well as the prevention of 573 million tons of carbon dioxide emissions linked to climate change.

Beyond that, the study emphasizes that nuclear power plants run on average at 90 % capacity, more than any other type of plant. The result of such productivity is inexpensive electricity, and the yearly avoidance of 650,000 tons of nitrogen oxide and 1 million tons of sulfur dioxide, which are tied to acid rain and smog.

FILE – In this March 16, 2011 file photo, steam escapes from Exelon Corp.’s nuclear plant in Byron, Ill. Companies that generate electric power with anything other than coal _ and companies that produce cleaner fuels or efficiency technologies _ are likely to benefit from the Obama Administration’s new proposed limits on carbon dioxide emissions from power plants. (AP Photo/Robert Ray, File)

Without a doubt, nuclear energy is getting squeezed in today’s market. On the front end, the capital cost of those plants runs well into the billions — too expensive for nearly all utilities, unless the federal government provides loan guarantees.

Meantime, the abundance of shale gas has resulted in sustained low natural gas and wholesale energy prices, making it difficult for the “merchant” plants that sell their power at market prices to compete. As a result, some nuclear units that are scheduled to be re-licensed may opt out, fearing that their power source cannot go head-to-head with today’s natural gas advantage.

How would that affect the Environmental Protection Agency’s carbon plan, and is this not the free market at work?

Exelon Corp., the country’s largest nuclear producer, says that it could close some of its facilities. To this end, Exelon and other nuclear power plant operators want the EPA to alter its calculation of nuclear energy’s climate contributions, giving full credit to states and companies for their avoidance of carbon releases. That, in turn, would enhance their value and preserve their presence.

Already, five nuclear units have either shut down or have announced that they will do so: Duke Energy and Southern California Edison closed their Florida and Southern California facilities, respectively, because of persistent technical issues. Meanwhile, Dominion Resources has retired its Wisconsin unit, Exelon will shut down a New Jersey plant and Entergy is ceasing operations at its Vermont Yankee facility, which was licensed to run until 2032.

“I think EPA gets it,” says Chris Crane, chief executive of Exelon Corp., at a recent Edison Electric Institute meeting. “We have asked for nuclear to be recognized the same as other carbon sources.”

If those changes are not made, “There’s an assumption that 6 % of the nuclear units in this country would be shut down,” he adds. “We must compete against the marginal source: natural gas. And we do not see those prices rising. We need diversification. We need a balanced portfolio.”

As the coal portfolio here wanes, the main choices are hydro, wind and solar as well as nuclear and natural gas fuels. By all accounts, natural gas is now path of least resistance, and a lot easier to get the associated plants built. Why would the nuclear sector try to counter this prevailing trend?

There’s a strong case, the nuclear sector says, pointing out that nuclear power accounted for 63.3 % of low-carbon sources of electricity. Hydropower, by comparison, accounted for 21.2 % while wind, geothermal and solar were 13.4 %, 1.3 % and 0.7 %, respectively.

That’s why the industry is now banking on Southern Co, Scana Corp. and the Tennessee Valley Authority, which are actively developing nuclear energy.

Southern Co. and its partners are building two new units where two other nuclear reactors now reside. The total price tag is estimated at US$14 billion. Of that, the partnership has gotten US$8 billion loan guarantee while it puts up US$6 billion of its money. Southern expects its first unit to be operational by 2020 and Scana is on a similar timetable. Both projects are being designed by Toshiba Corp.

The federally-owned Tennessee Valley Authority, meanwhile, is committed to building a new US$4 billion nuclear reactor at its “Bellefonte” site. The 1,260 megawatt facility is also expected to be generating power by the end of the decade.

“As a nation, we cannot afford to let any more of our existing nuclear energy plants close prematurely based on short-term economics or ideology,” says former Senator Judd Gregg, R-NH, in an email exchange. “We have to approach the issue of maintaining a diverse energy mix that includes nuclear, which is critical to our energy security, with a long-term, holistic view.”

Despite the setbacks, nuclear power has been a staple of the U.S. electric generation market while making positive contributions to the country’s economy and environment. It’s future here, though, is in question: The competitive landscape now leans toward less capital-intensive projects, however, the upcoming Clean Power Plan could increase the chances of carbon-free nuclear power. – Forbes