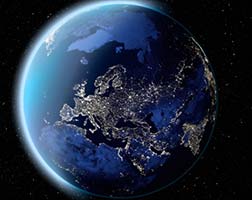 The EU executive is to unveil radical and ambitious plans on Wednesday to establish a single European market in energy supplies, purchases and consumption, in an attempt to loosen the Kremlin’s stranglehold on Europe’s gas supplies.

The far-reaching scheme would also strengthen the power of Brussels against national energy regulators; boost consumer choice transnationally when buying electricity services; generate a bonanza in energy infrastructure investment; and integrate supply systems regionally and on an EU-wide scale.

The proposals for a European energy union are to be presented by Maroš Šefčovič, a vice-president of the European commission in charge of energy policy. He reached back to the founding days of the modern EU in the 1950s to find a parallel for the current blueprint.

“We see it as the most ambitious energy project since the coal and steel community. We want to start a process to integrate 28 energy markets into one energy union,” Šefčovič said.

The 19-page draft blueprint, obtained by the Guardian, demands that Europespeak with a single voice on energy policy, a role that would devolve to the commission and a proposal that is already running into fierce resistance among some national governments.

“We have to move away from a fragmented system characterised by uncoordinated national policies, market barriers and energy-isolated areas,” says the document. “Achieving this goal will require a fundamental transformation of Europe’s energy system … an energy union that speaks with one voice in global affairs … a single energy market.”

Years of tension with Russia and its Gazprom monopoly that supplies most of Europe’s natural gas have come to a head with the east-west tussle over Ukraine. Brussels says Russia, the world’s biggest gas producer, is using its energy supplies as a political weapon and for blackmail purposes.

As part of his proposals, Šefčovič also said the EU was committed to overseeing and funding root-and-branch reform of the highly opaque and corrupt Ukrainian energy sector.

The predominance of gas as a means of pressure in the Russia-Ukraine conflict was evident again on Tuesday, with Gazprom and its Ukrainian customer embroiled in a dispute over payments and deliveries.

Gazprom’s CEO, Alexei Miller, announced that Kiev had not made its pre-payments for supplies on time and warned of “a complete cessation of Russian gas supplies to Ukraine in just two days, which creates serious risks for gas transit to Europe”.

In an attempt to wean Europe off overwhelming dependence on Gazprom, Šefčovič said there would be a focus on building a new “southern corridor” pumping gas from the Caspian basin to Europe via Turkey. It would carry Russian gas, but could also include supplies from Azerbaijan, Turkmenistan, Iraq and Iran.

Such plans have an ill-starred pedigree. The Russians recently scrapped plans for an alternative pipeline called Southstream running under the Black sea to Bulgaria and into central Europe. A previous western-backed scheme called Nabucco also bit the dust because of lack of investment and no clear guarantees of gas to fill the pipeline.

Šefčovič argued lessons had been learned. The southern corridor, entailing investment of $45bn (£29bn), “will be the biggest in world, and could be up and running by 2019”, he said. “Especially when you see the political games by Russia, it’s something we have to pay attention to.”

The commission document says in reference to Russia: “The political challenges over the last months have shown that diversification of energy sources, suppliers, and routes is important for ensuring secure and resilient energy supplies. Energy policy is often used as a foreign policy tool, in particular in major energy-producing and transit countries. This reality has to be taken into account.”

Germany is Gazprom’s biggest customer, buying around a third of its natural gas from the Russian monopoly. Six EU member states are 100% dependent on Gazprom for gas, and the union as a whole is the world’s biggest importer of energy. According to commission figures, it spent €400bn (£294bn) last year importing 53% of its overall energy requirements.

The proposals to be unveiled on Wednesday would need to be turned into several pieces of legislation by 2019 for the energy union to get up and running. They will run into problems in the European parliament, but greater resistance will come from some national governments.

Viktor Orbán, the pro-Russian Hungarian prime minister, hosted Vladimir Putin in Budapest last week, with energy issues at the centre of their discussions. He has already challenged the commission and vowed not to surrender sovereign national powers over energy policy. Some of Gazprom’s biggest clients, locked into long-term contracts, are major German energy firms and they are also certain to lobby Berlin against elements of the energy union.

“The EU has energy rules set at the European level, but in practice it has 28 national regulatory frameworks. This cannot continue,” says the document. The commission demanded a say when individual EU governments strike energy agreements with third countries.

Other new measures are planned to increase the energy efficiency of the bloc’s ageing housing stock, which have the potential to slash the need for Russian gas imports, according to research papers.

The EU’s renewable energy directive will also be updated, with an eye on targets announced in the 2030 package for a 27% clean energy market share by the end of the next decade.

Framing the climate debate in energy security terms may not be enough to win over countries such as Poland and the UK, which held out against giving Brussels a say in their energy decisions during last October’s 2030 debate.

“While we agreed to cost-effective 2030 EU-level targets for renewables and energy efficiency, we were clear, and member states agreed, there should be no binding national targets in either area to give countries greater flexibility to meet their climate goals,” a British government spokesman said. “We expect all future EU legislation to fully reflect that agreement.”

The commission, however, plans to bring forward a new electricity market design later this year to coordinate capacity mechanisms that integrate renewables and gas at the regional level.

A quicker deployment of smart grids is also foreseen. This would allow consumers to set appliances such as washing machines and boilers to run at times of low demand and lower cost.

“It means gradually leaving the comfort of regulated prices which offer no motive for consumers to change behaviour,” Šefčovič said of the planned “new deal for energy consumers”. Progressively, it is planned to allow consumers to moderate their energy consumption and sell energy back to the grid.

New interconnections between countries are also expected to lower electricity prices, while an integrated European energy market would allow consumers to buy from energy companies across borders.

“Consumers in one member state should be able to buy their energy freely and simply from a company in another. This requires the further adaptation of the current national regulatory frameworks,” says the blueprint.