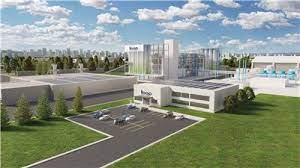 Sustainable plastics company Loop Industries along with Suez and SK Geo Centric (SKGC), a subsidiary of South Korea’s SK Group, one of Asia’s largest conglomerates, announced that SKGC will become an equal partner in the previously announced partnership between Loop and Suez, which was formed to build the first Infinite Loop manufacturing facility in Europe.

The expanded partnership will combine SKGC’s petrochemical manufacturing experience with Suez’s resource management expertise and Loop’s breakthrough proprietary technology to supply 70,000 tonnes of virgin quality, 100% recycled, PET plastic and polyester fibre to the European market. The Infinite Loop facility will offer a solution to consumer goods companies which have committed to goals for significantly increased use of recycled content in their products and/or packaging and help to meet the growing demand for recycled PET resin and polyester fibre. Through the collective expertise of SKGC and Suez, together with Loop’s technology, the Infinite Loop facility could save over 255,000 tonnes of CO2 every year, compared with virgin PET made from a traditional petrochemical process1.

The Infinite Loop facility will provide a solution for low to no value waste that is currently not recycled, positively impacting recycling rates in the location where it will be built. In addition to reviewing the feasibility of the project, the three companies are also reevaluating the optimal location for the European facility. The project is projected to break ground in 2023 in order to support the 2025 goals for recycled content as publicly stated by European consumer brands.

SKGC says it has developed significant knowledge and understanding of Loop’s sustainable plastics technology and its Infinite Loop engineering package over the last 2 years. Their plan to co-invest in a second major geographical market, in addition to the planned joint venture to roll out Infinite Loop manufacturing plants in Asia, is further validation of Loop’s potential to be a global leader in sustainable plastics, it adds.