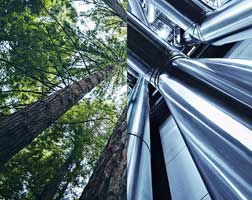 SkyNRG, the Amsterdam-based global market leader for sustainable aviation fuel (SAF), has chosen Haldor Topsoe’s technology for production of renewable diesel and jet fuel for their planned facility at Delfzijl, the Netherlands.

Read: Greenergy to use Topsoe technology to produce low-carbon fuels from waste tyres

SAF will be supplied directly to aircraft at the nearby airport. As a strategic partner, KLM Royal Dutch Airlines has committed to buy 75,000 tonnes/year of SAF for a ten-year period.

SAF reduces CO2 emissions by at least 85% compared to conventional jet fuel. The 100,000 tonnes produced at the facility will reduce CO2 emissions from aviation by more than 250,000 tonnes, says SkyNRG.

SkyNRG’s planned refinery is the first in the world to be entirely dedicated to producing renewable jet fuel and the first in Europe to produce certified SAF. It is the first of a series of planned SkyNRG refineries placed centrally at aviation hubs all over the world in order to provide SAF locally via direct supply lines.

“We are dedicated to make sustainable aviation fuel the new global standard. For our DSL-01 project, we have selected Topsoe’s technology after a very thorough selection process. Topsoe has not spared cost and effort to work with us to prove that they can use our most difficult feedstock to yield excellent results,” says Maarten van Dijk, Executive Director, SkyNRG.

SAF is certified as being sustainable in addition to the safety and performance certification issued by ASTM International that all jet fuel must meet in order to be approved for use. SAF reduces CO2 emissions by at least 85% when compared to conventional jet fuel and emits significantly less hazardous particles and sulphur than jet fuel from oil. The facility at Delfzijl will mainly use regional industrial waste streams as feedstock.

“We are very proud that a front-runner such as SkyNRG has chosen our HydroFlex technology for their first jet fuel refinery. We look forward to working together to show that flying can be more sustainable,” says Morten Schaldemose, Executive Vice President, Haldor Topsoe.

Under the agreement, Topsoe will be the licensor and supplier of basic engineering, proprietary equipment, catalyst and technical services. The project is based on HydroFlex Topsoe technology that produces renewable fuels, such as sustainable aviation fuel, from all renewable feedstocks. It can be deployed in both grassroots units and revamps for co-processing or stand-alone applications.