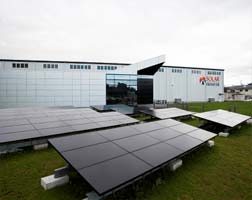 “Solar energy is a priority sector for meeting India’s high demand for clean, renewable and economical energy. The government of India has set a target of 175 GW of renewable energy by 2022, of which 100 GW will be solar energy. Agreement with Solar Frontier brings us one step closer to meeting our green energy commitment,” said Welspun Renewables Director, Sindoor Mittal. “Welspun Renewables is committed to achieving high level quality benchmarks at all of its project sites, and because of this we prefer to work with Tier 1 technology providers. We have worked with Solar Frontier on multiple projects before, and we do so again based on the proven high electricity yield and quality of its CIS technology, on top of the company’s close support.”

WelspunRenewables’s supply agreement follows a recent spate of Power Purchase Agreements that the company has signed with multiple state governments. The company targets commissioning over 1 GW of solar and wind capacity within fiscal 2015. Welspun Renewables is present across nearly all states in India.

“We are honoured to continue working with WelspunRenewables on its mission to help India meet its growing energy requirements in an efficient, environmentally-friendly manner,” said Atsuhiko Hirano, CEO of Solar Frontier. “This is a landmark agreement for Solar Frontier as we continue to develop our presence in key international markets with companies that are sustainable and show willingness to work closely together.”

CIS modules generate a higher energy yield than crystalline silicon modules in real-world operating conditions. This includes hot climates such as in India, where CIS modules benefit from a low temperature co-efficient (meaning a smaller loss in conversion efficiency as temperature increases), and their “light-soaking effect”, which further boosts power output after the module is exposed to light.

Solar Frontier is the world’s largest provider of CIS solar energy solutions by shipments and revenue. Manufacturing at GW-scale capacity from the southern Japanese prefecture of Miyazaki, its advanced production process has enabled it to achieve the highest level of mass production thin-film efficiencies at world-class production costs. In 2015, Solar Frontier is re-engaging the global market, from the Americas to Europe, South and Southeast Asia.