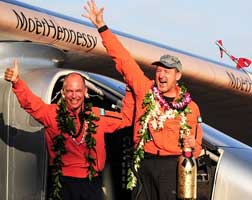 The darkest moment of André Borschberg’s unprecedented solar flight across the Pacific was not when he learned of the battery failure that has now suspended the Solar Impulse flight until next spring.

It was 12 hours into the journey, as he flew about 6,000 metres over the Pacific, south-east of Tokyo, and a decision had to be made about whether to continue. “Before every flight you have what we call the point of no return – it was the afternoon of the first day,” he says.

The staff at mission control in Monaco, and the engineers at the take-off in Nagoya, Japan, knew this was the moment Borschberg had to look out across the ocean and commit to crossing it. The winds and the deteriorating Japanese weather behind would have made a later return impossible – and there was a very strong reason for turning back.

The warning system that supervises the Solar Impulse 2 aircraft’s course and altitude, and triggers an alarm to wake up the solo pilot if it veers off while he is resting, was malfunctioning.

“The engineers were very much against continuing the flight,” says Borschberg, a former Swiss air force pilot and entrepreneur. “I felt that in the cockpit I could manage this deficiency, I could cope with it using other systems. The weather window was very good, so I decided to go ahead with the flight, but it was a very emotional decision because part of the team was not OK with it.”

He says he thought of his wife and his three children – who are in their 20s and 30s. “I hoped that I was not taking too much risk – thinking of my family. Do I have the right to do this? I felt that this was the right decision, but you still go into the unknown – something that has not been done before, five days and five nights.” Pointing the plane towards Hawaii, Borschberg had a long night with his thoughts. “It took me the first night to digest it. At sunrise I put it behind me, and focused completely on crossing the Pacific.”

On 3 July, 117 hours and 52 seconds after take off, Borschberg landed his plane in Kalaeloa, a small airport outside Honolulu – smashing several important aviation records in one go, including the longest solo-pilot non-stop flight ever made and the longest solar power flight, in terms of both distance and duration.

Welcoming him on the landing strip was his partner on the project – the balloonist and clean-energy advocate Bertrand Piccard, also Swiss, who started the Solar Impulse project more than a decade ago. “When I had this vision of an aeroplane flying day and night without fuel 14 years ago, everyone thought I was a mad dreamer,” Piccard explains. “When we did it to Hawaii, it was reality.”

Piccard was due to fly the next leg to Phoenix, Arizona, within 10 days.

When I had a vision of an aeroplane flying day and night without fuel 14 years ago, people thought I was a mad dreamer
The Solar Impulse 2 looks like an enormous but underfed gull, made mainly of carbon fibre, with wings that span 72 metres (wider than a Boeing 747) and are covered with more than 17,000 solar cells. The cells power the propellers and store up energy in the batteries so that it can run at night, when it dips from about 8,500 metres to an altitude nearer 1,500.

Hawaii was the eighth stop on the circumnavigation, which began with a flight from Abu Dhabi to Oman on 9 March, and had proceeded through India and Myanmar for the rest of that month, and China and Japan in April and May. Until the Pacific flight, the legs lasted between 13 and 20 hours, with Piccard and Borschberg taking four legs each.

Inside the cockpit a specially designed seat doubles as a reclining berth where the pilot can do some exercise – basic yoga – and a toilet. The pilot can take 20-minute naps, but Borschberg said he only risked doing so on the long leg “in very, very calm air”. After the loss of the warning system, he says he adopted a sleeping position that allowed him to “immediately take control of the aircraft in an emergency”.

In defeating the Pacific, the team completed the most challenging leg of the whole trip. Piccard says he was “elated” by the achievement, but within days the triumphalist mood in Hawaii was seriously dampened, when engineers opened up the crucial battery area. “I was in the hangar, 10 days after the landing, that’s when they told me,” says Piccard. He had been at the Monaco mission control during the Pacific leg, where hundreds of metrics of data are sent back from the plane by satellite. “We noticed that the battery was starting to overheat a little.” The problem wasn’t considered a safety risk, but they instructed Borschberg to take steps that might cool the batteries during the flight.

“When André landed, I was still supposed to take the plane and continue within a week to mainland America. Then, during the maintenance after the flight, the engineers said: ‘Wait a minute, the batteries have been damaged.’ They saw that it was not two weeks’ delay but months’ delay. I was already putting my stuff in the cockpit, and the engineers said: ‘No way, we are grounded.’”

Two months’ delay meant the end of the circumnavigation for this flying season – the second Pacific leg cannot be safely flown after mid-August.

Piccard says the news came like “a cold shower”. “You have three different feelings: One, as the pilot, is disappointment. As the chairman of the project I was thinking, maybe we can take advantage of it to be even more successful next year. And as a human being, I thought: you cannot fight against life. You can only accept it.”

Both of them say it was their fault, not a design flaw. The batteries were “too insulated” and the plane’s ascent was made too fast, which combined to overheat the battery. “We have nobody who can tell us how to do it – there is no benchmark,” says Piccard. “This is exploration.”

New batteries have been ordered and will be tested in a decompression chamber in Zurich. The plane is now under 24-hour guard, wrapped in a space blanket, in the University of Hawaii’s massive hangar.

When we speak, Piccard has just returned to Switzerland to raise some money. “It is about €20m (£14m) that I need to find,” he says. This year, 150 people were involved in the project, and he says it has cost about €150m since 2003, funded by corporate sponsors, individuals and more than €5m (£3.5m) from the Swiss government. “Projects like this, everything is expensive,” he says, while noting that his budget is only about 4% of what a Formula 1 team spends. “I believe that the success of the first part of the project was so big that [the funds] will not be too difficult to find,” he says.

Their progress so far has been hailed in some quarters as a new dawn for aviation, but the team are quick to emphasise that the plane is less a breakthrough in transportation – it can only hold one person, after all – than a step forward for clean technology. “The demonstration of an aeroplane flying without fuel has been done – I am elated by that,” says Piccard. “This is a real paradigm shift in the world of energy.”

His parallel #futureisclean campaign is planning to have a presence at the United Nations Paris Climate Change conference in November, hoping to push clean technology up the agenda. As long as the €20m can be found, the plane will be wheeled out of its hangar in spring, with take off scheduled for April. The team now wears a badge on the sleeves of their polo shirts, which reads: “See ya in 2016.” – The Guardian