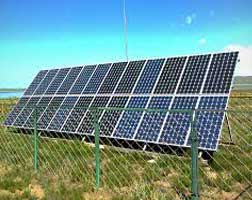 It took two weeks for Matthias Kynast to discover thieves had struck the solar park he manages near the German town of Arnsberg, when hikers reported a fence had been cut down.

The criminals that day made off with about 250 solar panels — each measuring 1 metre by 2m and weighing about 30kg. Although only a fraction of the 10,500 panels installed at the rural site, the bill was about €50,000, including installation costs.

“Of course it was a group. You can’t just tuck a panel under your arm. They did it very quickly,” says Mr Kynast of the theft in October. “Unfortunately, there are some people who choose to help themselves at the expense of others.”

As countries move from fossil fuel power generation in an attempt to cut carbon dioxide emissions, solar power is gaining market share around the world. And Germany, thanks to a decade of generous subsidies, has more installed solar power capacity than any other country.

But large coal and gas-fired plants still have at least one big advantage over solar panels — they cannot be uprooted and carted away. As German solar supply has increased, so has the theft of panels, cables and inverters.

“Solar theft continues to increase, despite the measures taken to prevent it,” says Frank Fiedler, chief executive of SecondSol, an online trading platform for solar products that has documented scores of such cases on a website.

“Thieves are able to escape with thousands of euros worth of equipment, which they consider a profitable night’s work.”

These tend to be situated outside built-up areas where organised gangs can pull up in lorries, work unobserved overnight and then make a quick escape.

Losses commonly amount to tens of thousands of euros, sometimes reaching as much as €500,000, Germany’s federal criminal police office says. It warns that solar panels are “often insufficiently [protected] or not secured at all”.

The introduction of solar power subsidies in eastern Europe has also made it easy to resell the equipment there — in some cases attracting thieves from across the border.

More than 3,000 solar panels were stolen in the eastern state of Brandenburg last year and victims incurred some €710,000 in theft-related losses. Equipment worth more than €500,000 has been stolen in the first four months of 2015 alone, state police say.

As more countries follow Germany’s lead in solar power, this type of crime is popping up elsewhere, including in the UK and US.

UK-based Green Build Energy had only just installed £30,000 of solar equipment on the roof of a building in Burton, near Birmingham, in 2013 when thieves struck.

“We left the scaffolding up overnight,” recalls Imran Khan, managing director. “When [employees] turned up in the morning, they noticed some [panels] smashed on the floor and most of them had been taken. . . It was a bit of a disaster.”

He added: “[Solar panel theft] seems like a big thing at the moment, which is horrendous for people who . . . are trying to do something good. Unfortunately, there are people who capitalise on that goodness.”

“Experience has shown that thieves will target anything they think can be sold on for a quick profit — from sheep to tractors and now solar panels,” says Tim Price, the company’s rural affairs specialist.

The rise on solar thefts has also led to the emergence of a cottage industry of companies providing solar security products and services.

Back at the Arnsberg plant, Mr Kynast is beefing up security by implementing a GPS tagging system. “A fence has a psychological effect, but it won’t keep [thieves] out,” he explains.

But with GPS installed, “if the panels move, there’s an alarm. We’ll see where it is and can alert the police”. – FT.com