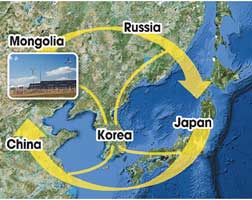 South Korea is taking part in the Northeast Asia super-grid project, along with Japan, China, Russia and Mongolia, in a partnership with Soft Bank Group, a Japanese tech giant founded and headed by its Korean-Japanese Chairman Masayoshi Son.

The project is for the construction of a power grid that will link the electricity supply networks of five neighboring countries to share energy.

The scheme is part of the ambitious push dubbed the “Smart Energy Belt of One Asia” proposed by Son. It aims at constructing wind and solar energy farms in Mongolia to deliver power to neighboring countries through land or seabed power grids.

Back then, Moon promised Son he would push ahead with his plan to decommission aging nuclear reactors and discard ongoing nuclear construction plans on the table.

Rep. Song Young-gil of the ruling Democratic Party of Korea, President Moon’s special envoy to Russia for the Eastern Economic Forum in Vladivostok next month, is expected to meet Son in Japan prior to the forum.

Heading the Northward Economic Cooperation Committee established under the presidential office, Song is likely to carry the project forward as a core task.

During the meeting, they shared a common vision that the super grid in Northeast Asia would reduce air pollution and greenhouse gas emissions. They also agreed the power grid project would pave the way for the establishment of a joint economic community in the region.

Under its vision to promote the grid as the company’s future growth engine, KEPCO signed a series of memoranda of understanding with other major energy companies, including State Grid Corp. of China and Russia’s state-run power company Rossetti.

Cho, who is the longest-serving head of the Korean state utility, has strongly backed the multinational grid project.  As a candidate for KEPCO chief in late 2012, he briskly voiced the need for the company to start the grid project, which connects Korea and Japan.