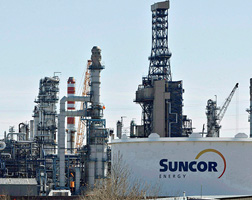 Suncor Energy Inc announced recently that it is slashing 400 jobs as it rolls out a fleet of self-driving trucks at its Canadian oils and mining operations.

The Calgary, Alberta-based company plans to deploy more than 150 driverless trucks and said it would start cutting jobs as soon as next year. It currently has nine autonomous trucks hauling material at its North Steep bank project in Alberta.

The company said it planned to work with its labor union to find ways to mitigate the number of employees who lose their jobs, including training for other positions. Heavy-equipment operators will still be needed to work on other equipment.

Suncor is the first Canadian oil sands company to introduce autonomous trucks, a technology that has been used in hard rock mines in other parts of the world. It began purchasing them in 2015, but has so far been operating them with drivers.

Each mine will have its own control center to manage the 400-tonne vehicles, which have been programmed to operate in conditions unique to the oil sands, Chief Operating Officer Mark Little told Reuters.

The trucks, which can run 24 hours a day while only stopping to add fuel, will enhance safety at the company’s oil sand mines and reduce operating costs, Little said.

He did not provide details on those savings or the cost of the truck fleet.