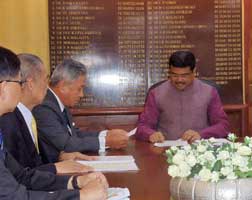 Taiwanese state-owned CPC Corp is proposing to invest US$6.6 billion in a petrochemical project in Paradip, which is located in the eastern Indian state of Odisha. A statement was released after a CPC delegation, led by Lee Shun Chin, President of CPC Corp, met with the Union Minister for Petroleum and Natural Gas Dharmendra Pradhan recently.

The planned petrochemical project will use the feedstock produced at Indian Oil Corp’s refinery in Paradip. IOC, the country’s top refiner, operates a 300,000 barrels/day refinery at Paradip.

The proposed cracker, based on different streams of feedstock, will have several downstream units for production of a diverse spectrum of petrochemical intermediates and end-products.

According to Reuters, IOC’s chairman had said last year at a shareholder meeting that the company would invest US$4.67 billion over the next few years to augment its petrochemical capacity.