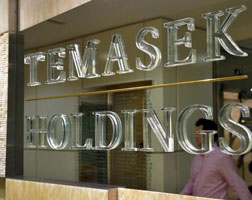 Temasek Holdings cut its energy holdings in the year through March as the Singapore state-owned fund’s assets jumped almost a fifth to a record US$197 billion. Exiting an oil-rig investment in Mexico hasn’t proved so easy.

Temasek and investment firm Ares Management LP, which each own 22.5 % of Integradora de Servicios Petroleros Oro Negro, failed to convince other shareholders to agree to a sale of the company, according to a bond document released by the driller in January. Oro Negro in April hired advisers to find “strategic alternatives” for the business whose main investor, Mexican private equity firm Axis Group, holds 49.5 %.

The value of Oro Negro’s USUS$900 million (SUS$1.22 billion) of bonds has slid more than 20 % over the past nine months, and the driller has paid bondholders US$875,000 to ease some debt covenants, according to a May 18 statement from the bonds’ trustee. Since Temasek bought its stake back in 2012, oil prices have plunged and a lack of agreement among shareholders isn’t helping the outlook.

“A situation where the equity guys aren’t talking means they will probably not come up with more equity,” said Arne Eidshagen, a money manager at Alfred Berg Kapitalforvaltning AB in Oslo, who cut his holding of Oro Negro bonds last year. “Oro Negro is suffering from the slump in offshore drilling.”

“As the matter is before the courts, it would not be appropriate for us to discuss the outcome” of the shareholders’ legal action, Stephen Forshaw, Temasek spokesman, said in a July 6 e-mail. He added that Temasek doesn’t flag its intentions for any of its investments.

Ares and Temasek notified Oro Negro of their intention to “explore alternatives to divest their stake” and “solicit offers from third parties to sell 100 % of the capital stock,” Oro Negro said in its January document.

Shareholders that weren’t named in the document filed a lawsuit requesting that ambition be considered null and void. An injunction restraining Ares and Temasek from soliciting third party offers was then granted, according to the document.

Oro Negro amended some covenants on its 11 % notes in order to pursue a new rig contract from state oil company Petroleos Mexicanos. Bondholders including seven hedge funds led by Clearwater Capital Partners approved the amendment, a May 28 notice shows. Oro Negro’s Villegas declined to comment on the status of the Pemex contract negotiation. Pemex officials didn’t immediately reply to an e-mailed request for comment.

Temasek has ridden a rally in global equities that helped assets increase 19 % to a record $266 billion in the year to March 31, it reported Tuesday. That’s more than double a decade ago. The proportion of its energy and resources assets fell to 5 % from 6 %.

Temasek began investing in Oro Negro in 2012 as Mexico reined in the state’s 75-year oil monopoly to boost production, driving a boom in rig orders funded by bonds. Pemex has leased five rigs from Oro Negro, with four earning around US$160,000 per day, under agreements that end between 2016 and 2018, according to Oro Negro’s first quarter report.

Oro Negro still has three pending orders for rigs from Sembcorp Marine Ltd. that it placed in 2013 to be delivered this year, Singapore stock exchange filings show. None have been canceled, Lisa Lee, a Sembcorp spokeswoman, said by e-mail July 2.

“The next game changer would be if previously indicated contracts were to materialize,” Alfred Berg’s Eidshagen said. “In the past, it was seen as if an indication of interest from Pemex was almost sure to result in a firm contract. Now, this is less certain.” – Straits Times