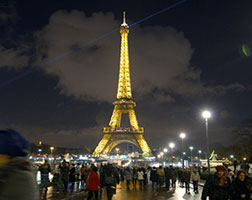 PARIS – After going nearly 30 years without a major upgrade, the iconic Eiffel Tower in France has undergone a modern-day makeover, complete with LED lighting, solar panels, and the star addition: two custom made VisionAIR5 wind turbines that together will produce 10,000 kilowatts of energy per year.

But unlike other recent additions to the tower’s exterior (think glitzy light shows), the turbines are as inconspicuous as possible. Located about 400 feet off the ground, they’re specially painted to blend in with the iron structure and run virtually silently.

But the role of these hidden figures is definitely not understated — the powerful vertical axis turbines can harness urban wind from any direction, UGE claims.

“The Eiffel Tower is arguably the most renowned architectural icon in the world, and we are proud that our advanced technology was chosen as the tower commits to a more sustainable future,” Nick Blitterswyk, CEO of UGE, said in a press release.

“When visitors from around the world see the wind turbines, we get one step closer to a world powered by clean and reliable renewable energy.”

During the past decade, Paris has been making strides to boost its environmental efforts. In 2004, the City of Paris Climate Plan was put in place to reduce the city’s energy consumption by 25% by 2020.

While not officially mandated by the city’s initiatives, the Eiffel Tower touts its sustainable efforts. In addition to the turbines, they’ve added rainwater collecting systems for flushing water, LED lighting and an overhaul of the heating system.