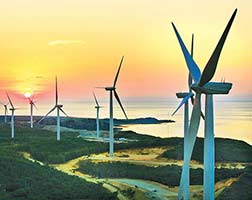 The European offshore wind industry must shed 26% of outlays to reach cost-competitiveness with conventional forms of energy by 2023, according to a study by EY.

The report states that the industry must significantly reduce costs over the next five years through a number of key actions, outlining where savings can be found.

These actions include deploying larger turbines to increase energy capture (9%); fostering competition between industrial players (7%); commissioning new projects (7%); and tackling challenges in the supply chain such as construction facilities and installation equipment (3%).

Together with clear political signals from lawmakers on regulation and support schemes, offshore wind could compete with conventional forms of energy such as gas, coal and nuclear in the first half of the next decade.

Alongside the release of the EY report, three of the biggest names in offshore wind have initiated a joint declaration – called ‘United Industry’ – as part of a commitment to reducing costs in the sector.

Dong Energy, MHI Vestas and Siemens Wind Power and Renewables have pledged to undertake joint and individual actions across the whole of the value chain to deliver “major long-term and tangible advancements.”

Michael Hannibal, CEO Offshore of Siemens Wind Power and Renewables, said: “Cost reduction remains a top priority of the offshore wind industry. We need to create profitable investments for offshore projects independent of subsidies. In a united industry, all stakeholders across the whole value chain are equally responsible to contribute and deliver. Siemens takes full ownership of this challenge. If we all do that, we will win.”

Claus Hviid Christensen, Vice President in DONG Energy Wind Power, said: “For offshore wind to realise its full and significant potential, we need to continuously reduce the cost of electricity. The good news is that we are indeed on the right track, and we are already seeing the industry taking important steps forward with an impressive pace. With a clear political framework for the development of offshore wind power after 2020, I am confident that we will meet our target of making offshore wind fully competitive with alternative energy technologies.”

Jens Tommerup, CEO of MHI Vestas Offshore Wind, said: “MHI Vestas Offshore Wind is committed to building powerful partnerships, leveraging on technical expertise and financial strength across the industry and driving down the cost of offshore wind. We have the markets’ most powerful product, we have added renewed competition to the offshore wind sector and our collaborative approach in optimising the supply chain represents three of the four pillars of cost reduction. ”

Thomas Becker, chief executive officer of the European Wind Energy Association said: “This study shows that offshore wind power in Europe will be a major contributor to the continent’s energy security now and over the course of the next decade.”

He added: “As much as we need politicians to come on board, it is also up to the industry to deliver on our commitments. It is no secret that cost reduction is a great challenge that we face in the offshore business; but as we continue to work together, innovate and compete, the sector will face down its trials in the years ahead. We must not forget the jobs, trade and growth that offshore wind is contributing to Europe.”