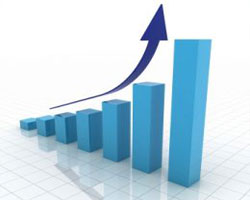 SAN FRANCISCO – U.S. oil production is on track to reach an annual all-time high by September of this year, according to Rystad Energy.

If production does indeed top out, then supply levels may soon hit a peak as well. That, in turn, could lead to shrinking supplies.

Coincidentally, the nation’s crude inventories stand at a record 471.4 million barrels, based on data from U.S. Energy Information Administration, also going back to the 1970s.

The staggering pace of production from shale drilling and hydraulic fracturing have been blamed for the 46% drop in crude prices CLK5, +3.48% last year. But reaching so-called peak production may translate into a return to higher oil prices as supplies begin to thin.

Rystad Energy’s estimate includes crude oil and lease condensate (liquid hydrocarbons that enter the crude-oil stream after production), and assumes an average price of $55 for West Texas Intermediate crude oil. May WTI crude settled at $49.14 a barrel on Friday.

Of course, in this case, hitting peak production isn’t assured.

“Some will be debating whether the U.S. has reached its peak production for the current boom, without addressing the question of what level will U.S. production climb to in any future booms,” said Charles Perry, head of energy consultant Perry Management. “So one might also say U.S. peak production is a moving target.”

James Williams, an energy economist at WTRG Economics, said that by his calculations, peak production may have already happened or may occur this month, since the market has seen a decline in North Dakota production, with Texas expected to follow. – MarketWatch