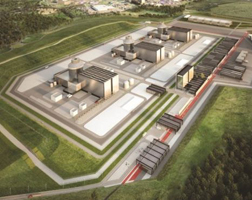 Japanese company Toshiba has withdrawn from the construction plans for a new nuclear power station in Cumbria, UK.

Toshiba said it would take a £125m hit from closing its NuGeneration subsidiary, which had already been cut to a skeleton staff, after it failed to find a buyer for the scheme.The firm has already spent more than £400m on the project.

The decision represents a major blow to the UK government’s ambitions for new nuclear and leaves a huge hole in energy policy. The plant would have provided about 7% of UK electricity.

“This is a huge disappointment and a crushing blow to hopes of a revival of the UK nuclear energy industry,” said Tim Yeo, the chair of pro-nuclear lobby group New Nuclear Watch Institute and a former Tory MP.

“Toshiba recognises that the economically rational decision is to withdraw from the UK nuclear power plant construction project, and has resolved to take steps to wind-up NuGen,” the firm said in a statement.

Toshiba’s US nuclear unit, Westinghouse, was declared bankrupt last year, leading it to search for a buyer to take the scheme. Toshiba also said it would no longer take forward new nuclear projects overseas.

South Korean energy firm Kepco initially attempted to pitch in, but eventually pulled back after to a change of leadership at Kepco.

Some industry watchers said the collapse of the scheme should be seen as an opportunity rather than a risk, for the UK to prioritise renewables instead.

“Shifting away from expensive, complicated technology towards cheaper and easier to build renewables gives the UK the opportunity to build an electricity system that will keep bills for homes and businesses down for years to come,” said Jonathan Marshall, an analyst at the ECIU thinktank.

However, others feel that the current government isn’t doing enough to push nuclear energy.

“The British government has blood on its hands as the final sad but predictable nail is banged into the coffin of Toshiba’s jinxed jaunt into nuclear power,” said Justin Bowden, the GMB national secretary.

The only new nuclear power station to get the go-ahead so far is EDF Energy’s Hinkley Point C in Somerset, which started construction in 2016 and is expected to be operational between 2025 and 2027.

Once NuGeneration is wound up at the end of January, the Moorside site in Cumbria will be handed back to government body the Nuclear Decommissioning Authority.