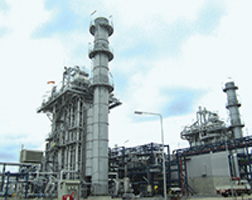 This project intends to increase the annual olefin production capacity of existing plant by 350,000 tons from current capacity of 1,700,000 tonnes (900,000 tonnes of ethylene and 800,000 tonnes of propylene). The plant is to be constructed adjacent to MOC’s existing olefin plant in Map Ta Phut, Rayong, Thailand and scheduled for completion in 2021.

This is an EP contract following the Front End Engineering Design (FEED) contract awarded to Toyo in the middle of last year.