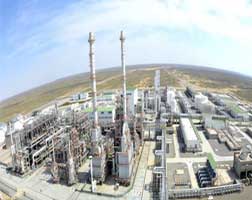 Located within the gas-to-gasoline complex, the 5,225-tonne/day methanol plant has progressively ramped up production as planned, with all performance targets met, since the complex’s official commissioning in mid-2019, according to Topsoe.

Late in 2019, Turkmengaz signed a memorandum of understanding with Kawasaki Heavy Industries Ltd. and Sojitz Corp. for design and construction of a second gas-to-gasoline complex, also presumably to be based on Topsoe’s Tigas technology, the government of Turkmenistan said last year.

In 2016, the government of Turkmenistan valued the cost of the Ovadan-Depe gas-to-gasoline complex at US$1.7 billion.