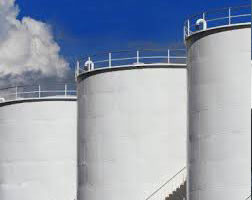 Both benchmarks gained in post-settlement trade, after the API suggested the higher-than-expected stockpile drop.

U.S. crude has fallen about 17 % since its May high of US$62.58. Further declines could push it toward the 20 % sell-off required from the last major peak to constitute a bear market.

More downside momentum could also push it to test the six-year low of US$42.03, set in mid-March, technical analysts said.

“There has been a lot of money looking to pile into the short-side, and there have been an accumulation of different triggers to cue that over a short time,” said Paul Horsnell, head of commodities research at Standard Chartered in London.

“None of those work in isolation, but put them all together in a short period and they’ll do it. And after that, the technicals kick in to give a further push down.”

In early trading of oil on Tuesday, investors fled to the relative safety of the dollar and U.S. bonds as banks in Greece ran down to their last few days of cash after Greeks voted in a referendum to reject an international bailout. The dollar rose to a five-week high, weakening demand for dollar-denominated commodities from users of other currencies. [FRX/]

Chinese equities continued to drop in price, despite support measures from Beijing.

Also weighing on crude prices was Iran’s determination to seal a nuclear deal with global powers to bring more supply to the market, as well as the restart of a key oil terminal in Libya.

While the U.S. oil complex was mostly under pressure, gasoline RBc1 rallied 1.3 % and ultra-low sulfur diesel HOc1 rose too, proving the strength of fuel markets during the peak U.S. summer driving season. – Reuters