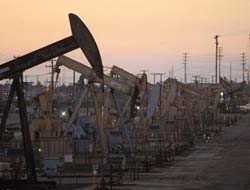 Two weeks of thin declines in the U.S. rig count have raised expectations that drilling activity is nearing a pivotal level that could dent production, bolster prices and coax idle rigs back to the field after a precipitous cull since October.

Energy producers responded quickly to a steep drop in oil prices over the last six months, idling nearly 800 rigs, or 50 %, since a peak of 1,609 rigs in October. In the last week of January, rigs fell by 94, the biggest drop on record, according to a weekly survey by oil service firm Baker Hughes. [RIG/U]

U.S. companies remain nervous about oil prices. Spending has been cut as prices fail to rebound significantly, and further price drops could quickly lead to more shrinkage in the rig count.

But the decline has slowed, dropping by just 23 rigs in the last two weeks, the smallest weekly cuts since December, according to the latest survey released on Thursday, a sign that the rig count could be approaching its low point. Some reckon that a 50-60 % drop is as far as it will fall, once energy firms remove their least efficient rigs.

“Production companies are in a holding pattern for now,” said Eric Lee, analyst at Citi in New York. “It could be the beginning of the flattening of the decline in the rig count.”

The U.S. rig count is vital for global oil markets that have been flooded with oversupply this year, but it has proven a conundrum for traders and analysts.

U.S. oil output remains strong and continues to contribute to the global glut, despite the drop in rigs, in part because it takes time for a decline in drilling to hit production levels, but also because rigs are more efficient now than even a year ago.

U.S. drillers were forced to scale back after oil prices fell 60 % to near US$40 a barrel in January, from more than US$100 a barrel last June. The rig count fell by 11 to 802 this week, according to the latest Baker Hughes survey, the lowest number since 2011.

“We think 1,000-1,200 rigs will keep production steady. With 800 rigs, we should see production decline in the second half of the year,” said Francisco Blanch, analyst at Bank of America. “We might see a little more rigs lost, but the majority of the fall is behind us.”

According to Baker Hughes, oil rigs in the Permian Basin of Texas, one of the country’s largest oil deposits, fell this week to 280, the lowest level since basin-by-basin records began in early 2011 and down from over 560 in November. In the Williston Basin of North Dakota, oil rigs are at 91, also the lowest since 2011, down from nearly 200 in November.

In both regions, however, the decline has eased.

The decline scenario was unthinkable six months ago when oil was at US$90 a barrel and the oil production boom showed little sign of abating, despite a drop from US$107 in June.

It remains to be seen how production will be impacted or whether a lower rig count will help reduce the growing U.S. crude stockpile that is causing jitters in the market.

“We have seen an awful lot of damage and the consequences for production will be manifested in months rather than quarters,” said William Herbert, managing director at Simmons & Company International investment bank in Houston.

Herbert expects the rig count to fall by about another 100 rigs before bottoming out at the end of June. – Reuters