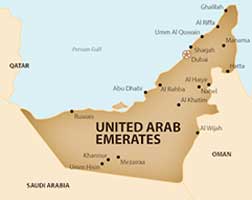 India and the United Arab Emirates (UAE) will set up joint working group on petrochemicals, fertilisers and hydrocarbons.
The new development comes after the visit of UAE Foreign Minister Shaikh Abdullah Bin Zayed Al Nahyan to India on Thursday.

During his visit, Shaikh Abdullah met a number of senior officials and co-chaired the Meeting of the Joint Commission with Sushma Swaraj, India’s External Affairs Minister.

Speaking to reporters in New Delhi during a press conference which was streamed live, Anil Wadhwa, secretary in the Ministry of External Affairs, Government of India said both the countries will look for investment opportunities in the hydrocarbon sector.

“There was discussion on the investment opportunities in the upstream and downstream projects in the UAE by the Indian companies and third countries of mutual interest. The UAE has also expressed interest to participate in India’s strategic petroleum reserves,” Wadhwa said.

There is not much direct investment from India into the UAE’s energy sector. Indian companies have not been represented in the ADCO concession renewal in Abu Dhabi this year.

Indian ambassador to the UAE T.P. Seetharam termed Shaikh Abdullah’s visit as highly successful with fruitful discussions in various fields. “The visit has taken ties between the two countries to new levels. A number of investment opportunities were presented to the UAE to invest in India,” Seetharam told Gulf News from New Delhi.

“We are creating a roadmap for the enhancement of ties between the two countries and there is going to be huge boost in the coming days.”