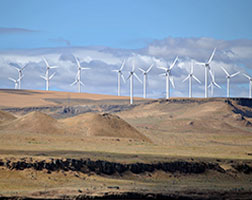 The UK has approved what will become the world’s biggest offshore wind farm, and one of the country’s biggest power stations of any sort. When completed, the Dogger Bank Creyke Beck project will have a total generating capacity of 2.4 gigawatts (GW), enough to power about 2.5% of the country’s electricity needs. Made of up two separate 1.2-GW farms of up to 200 turbines each, the project will be located about 80 miles off the coast and occupy up to 430 sq mi.

While final investment decisions are still being made, which will likely include backing by the UK’s renewable energy subsidy, Energy and Climate Change Secretary Ed Davey’s approval of the record-setting project is a major step forward, bringing the wind farm into the pre-construction phase.

“This development has the potential to support hundreds of green jobs and power up to two million homes,” said Davey. “Making the most of Britain’s home grown energy is creating jobs and businesses in the UK, getting the best deal for consumers and reducing our reliance on foreign imports. Wind power is vital to this plan.”

If and when it’s built, the project would far exceed the 175-turbine capacity of the London Array, currently the world’s largest operating offshore wind farm at 630 megawatts (MW).

“This is an awesome project,” said Nick Medic, director of offshore renewables at RenewableUK, the wind industry trade body. “It will surely be considered as one of the most significant infrastructure projects ever undertaken by the wind industry.”

As RenewableUK reports, the Dogger Bank Creyke Beck project would be the farthest offshore wind project from the UK’s shoreline, meaning “that it will be at the cutting edge of advancements in offshore wind farm development across the world.”

More powerful and reliable offshore wind turbines are being developed to harness the strong winds located farther offshore. The Dogger Bank Creyke Beck project will be sited in shallow waters approximately 100 feet deep — it is the first phase of developing the much larger Dogger Bank zone, which comprises six sites with an estimated total capacity of up to 7.2 GW.

While the UK has more offshore wind-generating capacity than the rest of the world combined, with about 1,200 offshore wind turbines and a total generating capacity of about 4 GW, there are still some sources of apprehension, as in the past several major projects have been shelved due to uncertainty regarding both wind energy subsidies and cheap oil prices.