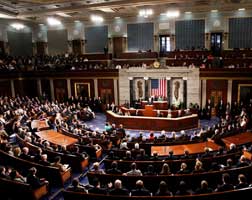 By the end of September, the US Congress will vote to life its four-decade ban on oil exports, according to the Wall Street Journal.

House Republicans plan to vote on a bill in the coming weeks to lift the U.S. four-decade ban on oil exports, setting up a clash with the Obama administration later this year over what to do with oil from a boom in domestic production in the past decade.

The vote would please more than a dozen oil companies lobbying Congress, and if successful, it could rattle global oil markets facing volatility and lower prices.

House Majority Leader Kevin McCarthy announced the vote, being scheduled for the last week of September, at a Tuesday speech before the Houston-area Chamber of Commerce. While the legislation is likely to pass the Republican-controlled House, its prospects in the Senate are less clear, and the White House said it opposes it.

“If there was ever a time to lift the oil export ban, it’s now,” Mr. McCarthy said in Houston. “Lifting the oil-export ban will not only help our economy, it will also bolster our geopolitical standing.”

More than a dozen oil companies—including Continental Resources Inc., ConocoPhillips Co. and Marathon Oil Corp.—have been pressing the issue with Congress in the past year. They argue that allowing unfettered domestic oil exports would eliminate market distortions, streamline U.S. petroleum production and stimulate the domestic economy.

The White House said last September 15 that it would oppose the bill because it believes the Commerce Department should make the export decision, not Congress. Spokesman Josh Earnest declined to answer questions on whether the White House might support an easing of the ban through other means.