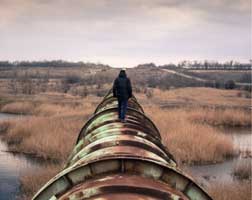 Conditions in the oil and gas infrastructure sector are hauntingly similar to those preceding the coal mining equities crash of 2011-2016, and a crisis may occur over expanding US oil/gas projects that will run into climate realities and fiscal limits, as documented in Global Energy Monitor’s Pipeline Bubble April 2019 report, which includes findings based on its Global Fossil Infrastructure Tracker, a project-by-project survey of oil and gas pipelines and terminals.

Global pipeline building has tripled since 1996 and the three areas where pipeline expansion is most highly concentrated are New Mexico, the Mid-Atlantic and the Midwest in North America, US, and Alberta, Canada.

Even though North America marks the lead with 51.5% of all projects in pre-construction or construction stages worldwide – the region records someUS$232.5 billion in capital spending on pipelines and US$1.05 trillion in capital spending on all-oil-and-gas infrastructure – pipelines under development favour gas over oil projects by a 4:1 ratio. The Canadian government has also decided back in 2018 to commit C$5 billion to acquire the Trans Mountain Pipeline.

The oil and gas sector is also facing increased censure over climate change, including divestment actions by 1,043 institutions representing US$8.7 trillion in capital. The Intergovernmental Panel on Climate Change have called for a 65% and 43% reduction in oil and gas use by 2050 – incompatible with the booming infrastructure expansion in North America.

Report coauthor Ted Nace has said: “Enthusiasm spilling out of the fracking boom has fostered unrealistic expectations of expansion in midstream oil and gas infrastructure. Investors are setting themselves up for disappointment; moreover, locking in US$1 trillion in new infrastructure is highly inappropriate at a time when climate scientists have warned that we have only a decade to reorient our energy system.”

The Global Fossil Infrastructure Tracker, in particular, $identifies, maps, describes, and categorises existing or proposed oil and gas projects; the tracker uses public sources to document each project and is designed to support longitudinal monitoring.

According to report coauthor James Browning: “The new interactive database of fossil infrastructure provides a combination of views, from global to local – thus, users are able examine the overarching scale of development by country and region, then drill down to the individual project, location, or company in order to connect what’s happening in their town or city to the rest of the world.”